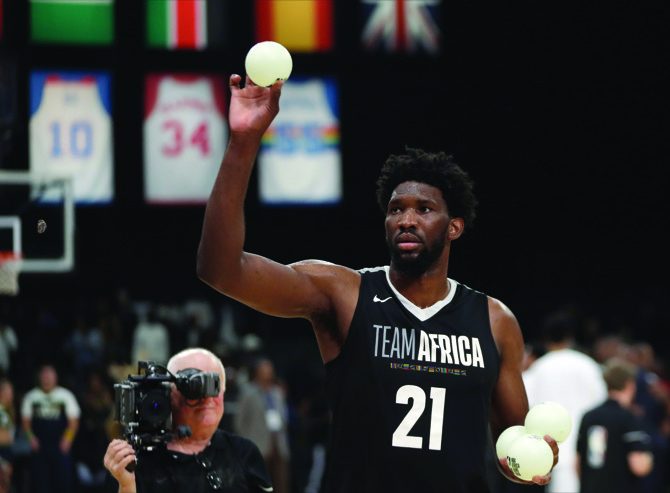 Timothy Ighoefe is an intimidating defender at 6-foot-11 and 245 pounds. Still, the Nigerian knows he must improve if his decision to play basketball instead of soccer is going to pay off and take him to the NBA.

The 18-year-old Ighoefe has committed to play for Patrick Ewing at Georgetown University next season, only three years after switching to basketball in his hometown of Lagos.

“I need to work on my speed, running down the floor baseline to baseline,” Ighoefe said this week at the unveiling of a new training facility at the NBA’s African academy in Senegal. “My left hand, I need to improve, to finish with my left hand.”

In other words, there’s potential but it’s a work in progress — just like Africa itself for the NBA.

“It’s a continent with over a billion people, with a fast-growing economy, fast-growing young urban population. That’s a good recipe for the NBA long term,” said NBA deputy commissioner Mark Tatum, also in Senegal for the training facility opening.

The NBA has big plans for Africa. An office was established eight years ago in South Africa. There’s an annual exhibition game featuring NBA stars.

Now, the NBA’s top brass says Africa is ready for more. Tatum said they’re creating a pan-African league that will involve existing professional clubs, and that NBA pre-season and regular-season games will be held on the continent “in the next couple of years.”

Another step is the new training center, built on the campus of a soccer academy in a coastal resort town 45 miles south of the Senegalese capital Dakar. Saly, a former Portuguese trading post, is now a getaway spot for Dakar’s upper class and is home to many French people.

The two parquet courts were imported from the United States. Simply being indoors and with air conditioning probably makes it the best basketball facility in Senegal. A fabric, tent-like covering is stitched together over steel trusses, and repurposed shipping containers facing the courts are used for weight training.

The academy is one of seven around the world, with three of them in China. It features fulltime schooling and training. It can accommodate 24 boys selected from English- and French-speaking African countries. The NBA holds camps for elite African girls, but there’s no center for them yet.

“All you have to do here is just focus on basketball and school,” Ighoefe said. “You don’t have to be worried about anything else. In Lagos, it’s different. There are a lot of distractions.”

The teenage boys begin their days with a light workout at 5:30 a.m. Then it’s breakfast, school, lunch, school, gym. They’re coached by former NBA and NCAA players and have traveled to Australia, Europe and the United States for tournaments.

Amadou Gallo Fall, NBA vice president and managing director for Africa, said the NBA is building from the grassroots, like the Jr. NBA programs expanding across the continent.

“We are only scratching the surface,” said Fall, a Senegal native who founded the nearby SEED Academy, which works closely with the NBA’s African operation. “We are empowering young people through basketball and in the process elite talent is going come out and get into the NBA, and also feed other leagues across the world, and our future league on the continent.”

This season began with 13 African-born players on NBA rosters.

Tatum said details of the pan- African league will be announced within months. It will involve co- operation from FIBA and existing professional leagues, he said.

“We’re trying to find a way to do it quickly, to be able to work with some of those leagues, to work with our partner FIBA, to get something up and running sooner rather than later,” Tatum said.

Africa lacks good infrastructure, but Tatum cited the new Dakar Arena, as well as Rwanda’s plan for a new facility, as incentive for the NBA to bring games here. He called the Dakar Arena a “world-class facility” but wouldn’t confirm the Senegalese sports minister’s announcement moments earlier that it would host the NBA exhibition game next year. 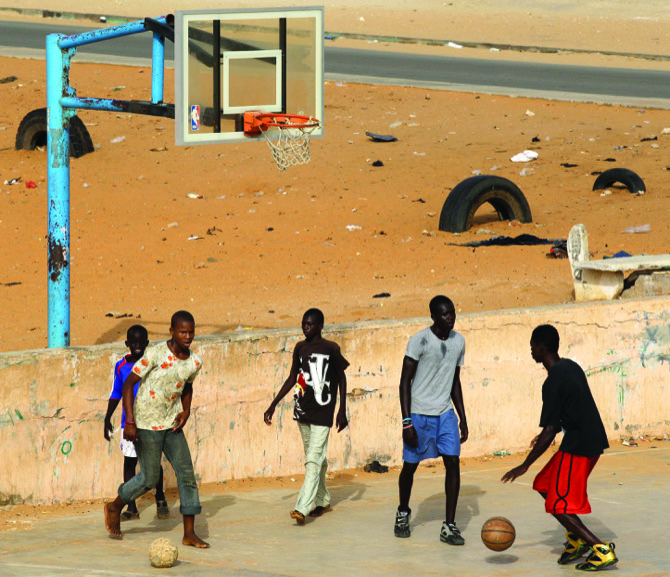 Soccer is by far the most popular sport in Africa. The likes of Liverpool and Barcelona boast fan clubs all over the continent, and the European start times make it easier to watch live.

Ighoefe catches highlights of his favorite player, Joel Embiid of the Philadelphia 76ers, on the mornings after games. He watches on YouTube and follows the Cameroonian star on Instagram.

African kids can play soccer with just a ball and any bit of space, even a street. But finding a basketball court, even just a cement half-court and a rim, is hard.

Ibrahima Ndiaye, director of Flying Star academy in Dakar, which has produced several NCAA Division 1 players, said the NBA can dramatically increase youth participation by building courts — a lot of them.

“That’s what is needed here in Africa to develop basketball in all neighborhoods,” Ndiaye said in a phone interview. “We need more and more usable infrastructure. It’s the only way to increase the number of kids who practice.”

China is a huge success for the NBA, so it’s often compared to the league’s initiatives in Africa.

“We’ve been in China for 30 years,” Tatum said, adding some perspective. “We opened up our office here on the continent, in South Africa, only eight years ago.”

Tatum said that figure of 13 African players on NBA starting rosters could double within a decade.

“For us,” he said, “it’s a long-term investment and long-term play.”Ken Maguire, Saly, AP