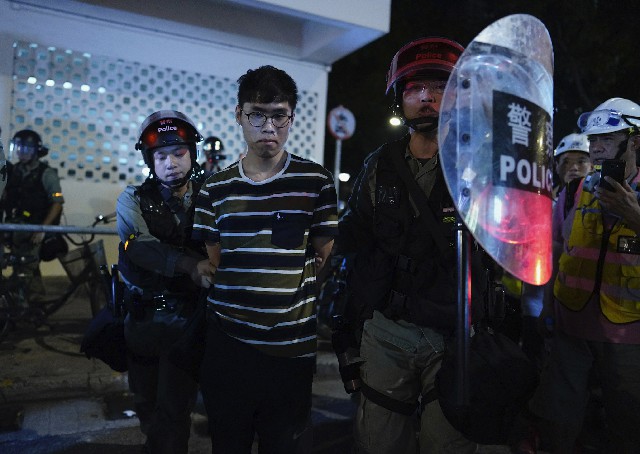 As one of Hong Kong’s protests became increasingly violent last month, Ventus Lau ventured near the front lines where demonstrators had ripped down smart lampposts and surrounded a police station. He got a whiff of the tear gas. Then the cops got him.
Police took Lau’s phone and his Octopus transport card, but he made bail with help from a fund that provides legal and medical support to protesters. When Lau checked in with police again on Friday, they returned the money. He was released unconditionally.
“I will still try to participate,” said Lau, a 25-year-old writer who was raised in a public housing project. “Maybe I’ll keep a low profile this weekend. Then I’ll see what I can do.”
Lau, who was arrested on charges including illegal assembly after organizing an August march, is among hundreds of demonstrators who’ve found themselves ensnared by Hong Kong’s legal system in protests that have morphed into a broader pro-democracy movement. But so far the detentions have done little to keep protesters off the streets: While police have made 1,474 arrests of protesters ranging from 12 to 83 years old since June 9, only about 200, or 14%, have undergone judicial proceedings.
Lau was held for 46 hours, including in a police detention center which has been used to handle the overflow from the prison system. Under Hong Kong law, protesters can only be held for 72 hours without charges.
Faced with growing denouncements of alleged police brutality, officers are becoming increasingly frustrated with the judicial system, particularly how demonstrators can get bail easily. In a press briefing on Friday, a senior police officer, who requested not to be identified, said it made little point to arrest people if the punishment wasn’t enough to deter them from hitting the streets. He said only a handful of protesters didn’t make bail.
What’s worse, the police have struggled to win the battle for public perception. The arrests risk fueling allegations of police brutality, and even turnout, as contentious detentions go viral or are live streamed – including images of some demonstrators being wrestled to the ground. Detentions of a series of prominent pro-democracy voices in late August, including the re-arrest of Occupy leader Joshua Wong, helped fuel the worst weekend of violence in the city since its handover to Chinese rule in 1997.
The police may be betting that the arrests may make people “afraid to take up hardcore protests,” said Chung Kim-Wah, of Hong Kong Polytechnic University’s Department of Applied Social Sciences. “But to clear up the antagonism from the issue will be extremely difficult.”
Hong Kong leader Carrie Lam conceded on Sept. 4 to the main demand to withdraw a bill allowing extraditions to China. But she hasn’t budged on their other requests for an independent inquiry into police tactics and the release of detained protesters, both of which could help defuse the standoff.
Amid fears of doxing by protesters, riot police have dressed in black masks and removed their identification numbers, making it difficult to identify cases of brutality, said Martin Lee, a barrister and founder of the Democratic Party of Hong Kong. Those moves have been criticized by human rights groups including Amnesty International, which on Friday accused the police of torturing and beating protesters.
“Those committing malicious offenses like damage to property, you can’t complain if they’re detained,” Lee said. “But on the other side, what about the police?”
Rights groups, which have long denounced the use of arrest by mainland authorities to silence dissent, including the detention of up to 1 million Muslim Uighurs in Xinjiang province, are now scrutinizing methods in Hong Kong.
Chinese authorities at the border with neighboring Shenzhen have begun regularly checking the smartphones of people crossing from Hong Kong for evidence of protest activity. It’s led to interrogations or detentions, including those of accredited journalists, according to a statement by the Foreign Correspondents’ Club of Hong Kong.
Reporters at police briefings have begun bringing their own footage of alleged brutality, but officers argue they don’t show a full picture, only capturing part of an event. The force now kicks off press events with their own edits of what happened at recent protests.
Edward Leung, executive director of Hong Kong Playground Association, a group providing social services to youth, said authorities should use leniency, including parole, instead of jail time and to spare protesters criminal records. Lam should be more proactive in facing the public and pursing dialogue, rather than leaving the police to handle public relations, he added.
Lau, the protester who had his bail money returned on Friday, said he was detained even though his group had applied for approval for his march. He left early as things turned violent. Police who stopped him found political banners and first aid materials, but no weapons, he said. He’ll lay low for a while, he said, but hasn’t thrown in the towel just yet.
“They may think this kind of ‘white terror’ may stop the protests, but why are people going out to the streets even after the bill was withdrawn? Police brutality,” Lau said. “They can’t arrest all the protesters.” Blake Schmidt & Natalie Lung, Bloomberg