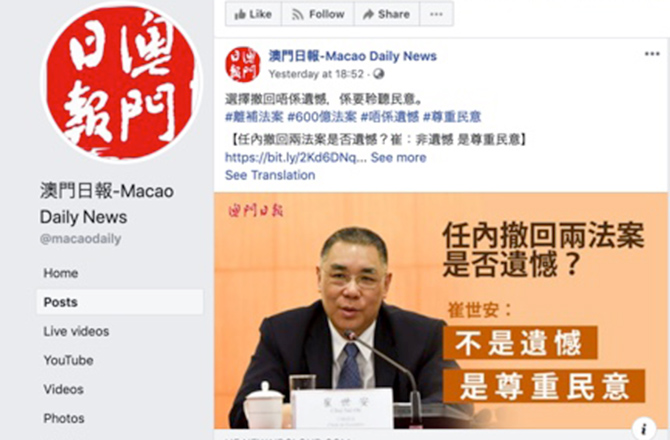 Netizens wrote quasi-compliments on Chief Executive Chui Sai On’s responses on the withdrawal of two bills from legislation, as he said it was done “out of respect for the people.”

The Chinese media reported that at the press conference wrapping up his decade as the top official in the Government of the Macau Special Administrative Region, Chui was asked to grade his own performance during his two mandates.

He replied that it was difficult to grade oneself. Self-criticism is not an easy task. Therefore, he said he would leave that task to the general public.

As for his future, he said he had not received news regarding this from Beijing. He also hinted that he wanted more leisure time after he passes the position to Ho Iat Seng, his successor.

Chui expressed his regret that he could not finish work in the areas of public housing, light rapid transit and medical review. These, according to him, are all related to the quality of life of the people.

There are a lot of reasons explaining the delay of public infrastructure, Chui said. Such delays may have been related to legal and administrative procedures. Chui believed a review is required in this area.

He also praised the team under the supervision of Raimundo do Rosário, the secretary for transport and public works. He said the team had tried its best to get back on schedule.

Chui withdrew two bills from the legislature during his two mandates, namely the Compensation Bill for Government Officials and the Public Investment Company Bill.

The press asked him if he regretted withdrawing the bills. In response, the top official hedged a bit with his answer, in the view of some netizens.

Chui said that he did not regret withdrawing the bills, but learned two lessons. He has learned to listen to the people, whose advice should be objectively respected by the government, if the latter is a responsible one.

Netizens made comments on the Facebook page of the city’s largest Chinese newspaper, the Macao Daily News which headlined yesterday’s edition with the outgoing chief’s decision to reopen economic housing applications.

A netizen commented on Chui’s performance colloquially, “On On is so cute.” Another commented, “I saw an aura around his head.”

A netizen commended Chui’s performance, saying, “At least he’s saying something good to the ears.”

Speculation on Chui’s decade-long preparation for this moment was also spotted: “Ten years spent to sharpen his sword. His ‘respect for the people’ is invincible,” went the comment. Staff Reporters