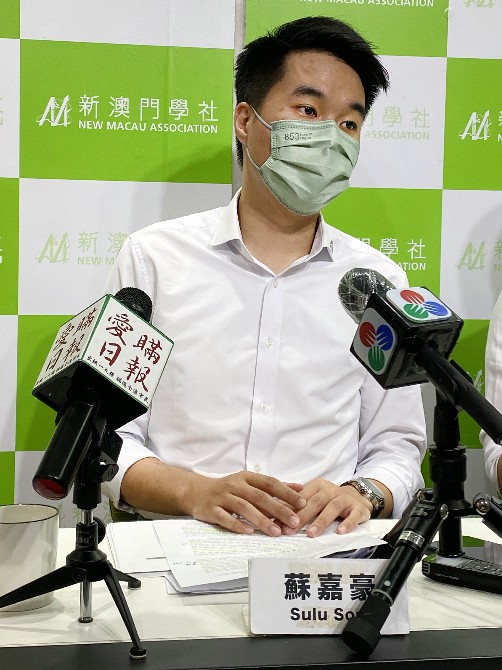 The New Macau Association (ANM) is categorically against the proposal, recently addressed by the Legislative Assembly’s (AL) third standing committee, that aims to ease the conditions for non-residents to reach a residency status, the Association expressed in a press conference held yesterday.
“On May 24, we had a meeting [with the third standing committee]. At this meeting, the government proposed a new amendment to the bill [Legal Regime for Immigration Control, Residence and Residence Permits in the Macau Special Administrative Region]. The most relevant content [of this amendment] is that there is completely new content on article 43,” vice president of the ANM and lawmaker Sulu Sou explained.
He added, “This is a very sudden decision by the government as they also suggested loosening the requirements for temporary [non-permanent] residence, allowing those who come to Macau frequently or regularly for school, work or business to be regarded as having habitual residence [in Macau] even if they are not staying overnight.”
Sou added that the proposal from the government that has been discussed behind closed doors and is gathering support from many legislators will have the effect of changing the conditions to be fulfilled by any person wanting to be granted residency status in Macau.
At the same time, the proposal is contrary to the definition of “habitual residence,” which has been used as the main criteria for over 20 years to define if someone meets the requirements to become a resident.
For Sou, this is a very important change and has led the ANM to express its opposition. The proposal completely changes the existing principles which stipulate that “someone who does not stay overnight in Macau and does not spend at least 183 days in Macau per year cannot see his residency status renewed,” he remarked, noting the many cases and court rulings on the matter over the past 22 years.
“This [proposal] undoubtedly shakes the foundation of the existing residency [application and granting] system,” Sou said, adding that such change not only does not have any consensus or support from society but can also “pose an [immediate] significant social risk.”
During the same committee meeting, Sou added that are several lawmakers who are calling on the government to make even further changes.
“There were several legislators – at least six – who are trying to push the government to go even further, wanting the government to establish a period for which the new law will have retrospective effect, allowing it to benefit between 500 to 700 cases that are currently pending in judicial appeals or administrative procedures,” Sou remarked.
“They even want people who never come to Macau, do not work in Macau or study in Macau, to have the possibility of having their resident status granted due to an alleged ‘relevant contribution to Macau’, and we do not know what this is nor [has the term] ever been defined.”
On the same topic, another vice president of ANM, Rocky Chan, added that this “last minute” proposal to amend the Immigration Law was never subjected to any public feedback or consultation since, “when the draft bill was subjected to public consultation back in 2018, this proposal did not exist and was not presented to the citizens,” noting also that the government’s practice of trying to rush this amendment is precisely intended to avoid public scrutiny on the matter.
“The sudden amendment is not a responsible [act] and is procedurally inappropriate,” Chan said, adding that the government is planning to have a public consultation on the legal system concerning the “introduction of high-level talents” by September this year. This would represent a good opportunity to include this new idea and subject it to broad public opinion.

CCAC report and IPIM court case are reasons behind the amendment

Questioned on the topic, Chan remarked that the ANM believes that the sudden proposal to amend the Immigration Law are grounded in the conclusions of the July 2018 report by the Commission Against Corruption (CCAC), which noted that there was a loophole in the regulations governing the need to comply with the 183 days per year rule to see temporary residency status renewed.
Later, during the court case that involved several high-ranked officials of the Macao Trade and Investment Promotion Institute (IPIM), including president Jackson Chang, the courts also analyzed the criteria and flaws of the Institute in evaluating the cases.
Such evaluation led the IPIM to stop the approval of any residency application renewal until they could amend and establish new internal procedures that would comply with the law.