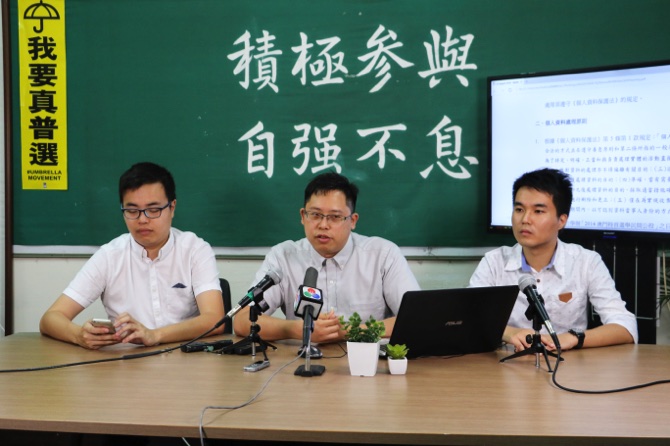 The New Macau Association (ANM) thinks that the Office for Personal Data Protection (GPDP) is targeting their organization in order to intimidate and frighten them. They have stated that they believe this is aimed at preventing them, or any similar organization from undertaking any ‘public referendum.’ ANM is making the claim following the latest development regarding the case involving the association and the GPDP.
“We speculate that the Macau Personal Data Office [GPDP] wants to create a precedent of punishing the organizers of the civil referendum in order to deter other people from hosting similar events,” Jason Chao, vice president of ANM said at a press conference held yesterday by the organizing committee for the 2014 Civil Referendum.
“We believe that they [government authorities] fear a possible rising trend of this kind of vote [referendums] in Macau,” he added.
On the topic, Chao also added that government action is intended to prevent what it considers to be undesirable conclusions. His comment references the collection of data (namely Macau ID cards numbers) that is collected with the purpose of ensuring that the voters/referendum participants are official Macau citizens and participating in their own name. In his opinion the “modus operandi” of the GDPD will contribute to a “further deterioration of human rights in Macau” in a way that will prevent the civic participation and expression of public opinion.
The president of the ANM, Scott Chiang, added: “They [authorities] cannot prevent public vote or a civil referendum from happening at all, but they can greatly reduce the credibility of it by denying access to a very technical way of identifying the voters.”
Chao affirmed that according to their legal rights, the organizing committee has already formally presented a written reply to the most recent GDPD accusation of illegal data collection that carries a fine that can be as high as MOP40,000 with a minimum of MOP4,000.
In the instance that the GDPD decides to enforce that fine, the organizing committee has indicated that it is prepared to contest it in court, Chao noted.
He added that the reply of the organizing committee is based on legal opinions collected by the group. The reply has been constructed with the participation of a legal advisor and independent researcher Kai Yeung Wong. It seeks justification on the legislation of Personal Data Protection, namely such laws which exist in the European Union which Chao says is the base of the Macau legislation on the matter and is often cited by the GDPD, including in the last letter from the government department.
Although the letter received by Chao reports only to the civil referendum of 2014, the activists think that the fact that the media outlet Macau Concealers, linked to the ANM, which recently undertook an online vote for the unofficial nicknames of Macau’s Panda cubs, might have influenced the decision of the GDPD to present this new case.
“I guess that probably had something to do with the Panda [cubs’ names] vote but that’s my speculation,” he said recalling that the letter from GDPD came shortly after the launch of the online referendum, although he reaffirmed that until the present there have been “no complaints [from any department] regarding the Panda [cubs’ names] vote.”
According to him, the organizing members of the referendum have been targeted three times over the 2014 actions that compiled public opinion on whether the CE should be elected by universal suffrage in 2019 in addition to other questions on the topic of political reform within the region.  The previous two cases have not resulted in any formal accusation from either the Public Prosecutions Office or the GDPD, although according to Chao, they may yet be raised within the next three years.
Despite restrictions they claim to have faced, Chao does not exclude the possibility of repeating such an act. He reaffirmed: “this depends on the political needs. If there is a topic that we think should be put to a vote, of course we will host a new round of the civil referendum.”

no accusation yet regarding ‘hotel estoril banner display’

Questioned during the press conference on the case of the 2014 Civil Referendum, Scott Chiang said regarding the status on the case of the Hotel Estoril Banner display: “there is no formal accusation yet. I know nothing more about it.” The same reply was given regarding other cases where Chiang is being investigated. By Chiang’s own count there are currently three cases running against him.