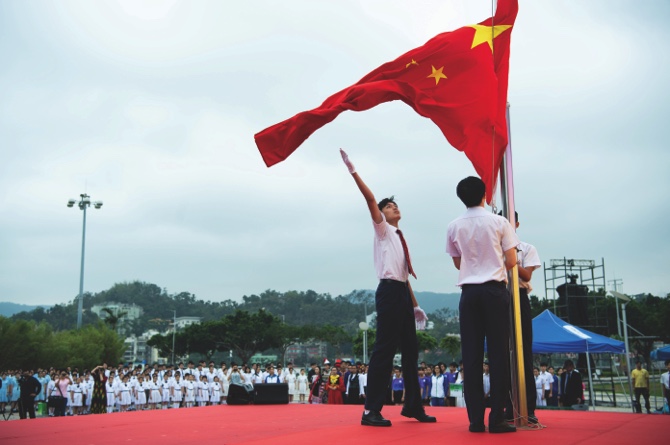 The latest version of China’s patriotic education implementation plan proposes to guide people from the SARs to increase their sense of national identity.

According to the plan released by the State Council on Tuesday, China will “enhance practical education on One Country Two Systems and guide people, including compatriots from Hong Kong SAR, Macau SAR, Taiwan and overseas, to increase their sense of national identity and to proactively protect the country’s unification and ethnicity.”

Strengthening patriotic education in the new era is of great and far-reaching significance to inspire a Chinese ethos, uniting the whole nation, securing a decisive victory in building a moderately prosperous society in all respects, striving for the great success of socialism with Chinese characteristics for a new era, and realizing the Chinese Dream of national rejuvenation, said the document.

Patriotic education in the new era should be guided by Marxism-Leninism, Mao Zedong Thought, Deng Xiaoping Theory, the Theory of Three Represents, the Scientific Outlook on Development and Xi Jinping Thought on Socialism with Chinese Characteristics for a New Era, it said.

The education, on the theme of realizing the Chinese Dream of national rejuvenation, should ensure that love for the party, the country and socialism go hand in hand, said the outline, stressing the importance of guiding people to safeguard national reunification and ethnic unity.

It stressed the role of Xi Jinping Thought on Socialism with Chinese Characteristics for a New Era in arming the whole party and educating the people.

Patriotic education should also focus on education in socialism with Chinese characteristics, the Chinese Dream, China’s national conditions and the world situation, as well as fine traditional Chinese culture.

According to the document, the education should focus on young Chinese, and patriotism should be embedded in the whole process of school education.

The document requires better use of mass media, fine literary and artistic works and online patriotic content to create a sound atmosphere for patriotic education in the new era.