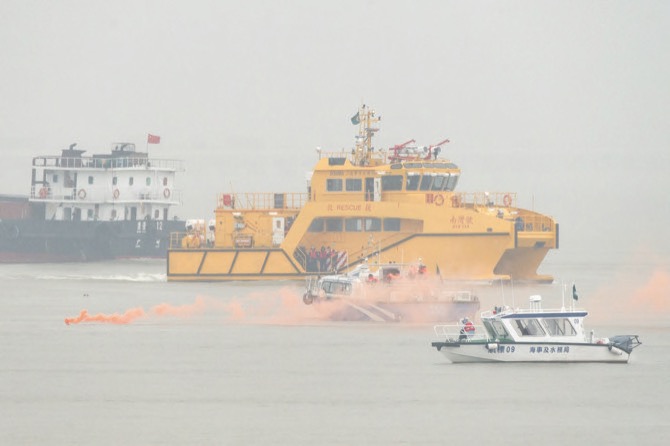 The Macao Customs Services used its latest police drone to search for and locate seafarers during yesterday’s search and rescue drill.

Carried out in the sea by the Macao Science Museum and the Macau Outer Harbor Ferry terminal, the drill served mainly to assess the rescue coordination response and order maintenance of relevant governmental departments.

The exercise simulated the collision of two passenger ships on sea, with 14 passengers injured and three people missing.

Participants in the exercise included the Marine and Water Bureau, the customs authority, the Fire Services Bureau, the Health Bureau, and two shipping companies.

Wu Chu Pang, head of the Maritime Activities Department of the marine authority, said after the drill that Macau is developing a marine upstream project, and that the safety of vessels at sea is worthy of attention. He believes that the drill can enhance the emergency coordination capabilities of shipping companies in upstream projects, and enhance the coordination ability of governmental departments.

Yesterday’s drill lasted about one and a half hours, with 160 people participating.

The marine authority said that the process was smooth and achieved the intended purpose.

No such accident has yet been reported in 2019. As of today, the marine authority has only prosecuted two bulk carriers, which previously collided with beacons. JZ