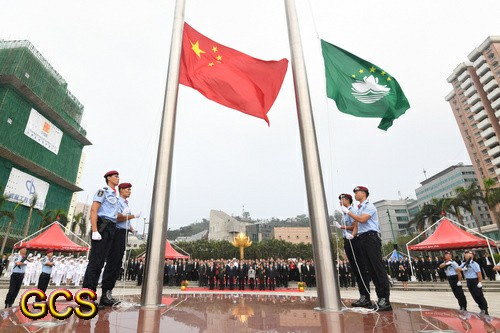 The proposed amendments to Law No. 5/1999 — “The use and protection of the National Flag, Emblem and Anthem” — were almost unanimously approved by the Legislative Assembly (AL) on May 17.
The revisions received 28 votes in favor and only one abstention.
The approved modifications offered clearer guidelines for the use of the national flag, including unequivocal guidelines to encourage Macau residents to use the national flag when appropriate and to wear a badge featuring a national emblem on solemn occasions.
Such ratifications are intended to allow locals to “convey their patriotism,” Secretary for Administration and Justice André Cheong said at the AL.
Other modifications legislated particular rules for the dimensional ratio of the national flag, flagpole, and national emblem; and the adjustment of their sizes to fit the purpose, venue, and the surroundings.
New consent will be given to designated deceased individuals to cover their remains with a national flag.
The approved amendments introduced some new prohibitions as well, such as a ban forbidding people from using the national flag or national emblem on registered designs and new forms, and a prohibition on hanging or inserting the national flag upside down and disposing of it at will.
The last regulation was enacted to enhance the city’s education on nationalism, including the inclusion of national flags and emblems in Macau’s primary and secondary education, and a new standard to require the local media to cooperate with the promotion of national flags and emblems.