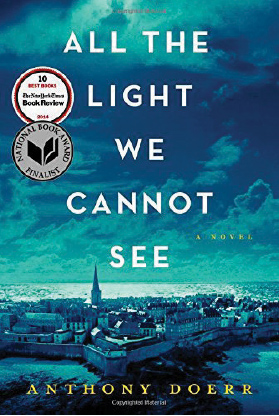 ALL THE LIGHT WE CANNOT SEE
By Anthony Doerr, Scribner
With brisk chapters and sumptuous language, Doerr’s second novel follows two characters whose paths will intersect in the waning days of World War II: an orphaned engineering prodigy recruited into the Nazi ranks, and a blind French girl who joins the Resistance. Tackling questions of survival, endurance and moral obligations during wartime, the book is as precise and artful and ingenious as the puzzle boxes the heroine’s locksmith father builds for her. Impressively, it is also a vastly entertaining feat of storytelling.

DEPT. OF SPECULATION
By Jenny Offill, Alfred A. Knop
Offill’s slender and cannily paced novel, her second, assembles fragments, observations, meditations and different points of view to chart the course of a troubled marriage. Wry and devastating in equal measure, the novel is a cracked mirror that throws light in every direction — on music and literature; science and philosophy; marriage and motherhood and infidelity; and especially love and the grueling rigors of domestic life. Part elegy and part primal scream, it’s a profound and unexpectedly buoyant performance.

EUPHORIA
By Lily King, Atlantic Monthly Press
In 1933, the anthropologist Margaret Mead took a field trip to the Sepik River in New Guinea with her second husband; they met and collaborated with the man who would become her third. King has taken the known details of that actual event and created this exquisite novel, her fourth, about the rewards and disappointments of intellectual ambition and physical desire. The result is an intelligent, sensual tale told with a suitable mix of precision and heat.

FAMILY LIFE
By Akhil Sharma, W. W. Norton & Company
Sharma’s austere but moving novel tells the semi-autobiographical story of a family that immigrates from India to Queens, and has just begun to build a new life when the elder son suffers severe brain damage in a swimming pool accident. Deeply unnerving and gorgeously tender, the book chronicles how grief renders the parents unable to cherish and raise their other son; love, it suggests, becomes warped and jagged and even seemingly vanishes in the midst of mourning.

REDEPLOYMENT
By Phil Klay, The Penguin Press
In this brilliant debut story collection, Klay — a former Marine who served in Iraq — shows what happens when young, heavily armed Americans collide with a fractured and deeply foreign country few of them even remotely understand. Iraq comes across not merely as a theater of war but as a laboratory for the human condition in extremis. The collection is hilarious, biting, whipsawing and sad: the best thing written so far on what the war did to people’s souls.