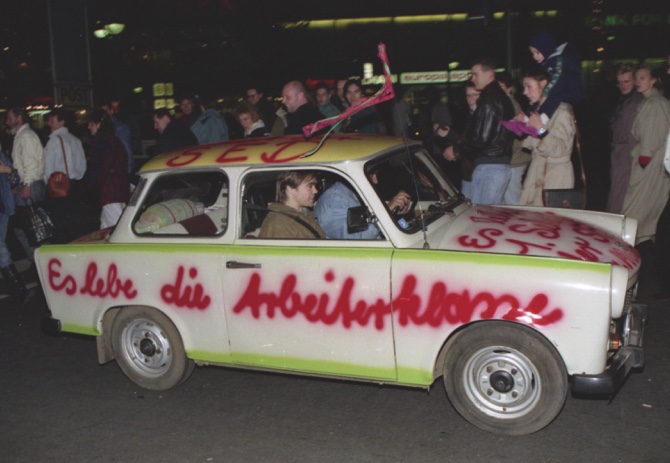 The walls of the Bornholmer Huette pub were last painted in 1973, a light beige that has gradually cracked and darkened into a caramel brown from decades of cigarette smoke.

The “Huette,” as regulars call it, has been in Matthias Gehrhus’ family since 1954 and he doesn’t plan on changing it any time soon. Its Spartan styling recalls the days when it was a meeting place in communist East Berlin’s Prenzlauer Berg neighborhood, somewhere you’d go to catch up with an old friend over a cheap beer.

Gehrhus, 50, was born into that world and doesn’t want it back. But he also understands the feelings of many former East Germans that, 30 years after the Berlin Wall fell and communism collapsed, not everything has improved.

“It was a simple life then. Today, everything’s so complicated you collapse under the weight of it, and there’s always new regulations, new rules,” he said.

“There was never a problem with money,” Gehrhus added, noting that life’s necessities were taken care of, even if travel abroad was restricted.

“Sure you couldn’t check out the world, but in the last 30 years I still haven’t checked out the rest of the world,” he said.

A government report this year lauds the state of German reunification as “an impressive success story,” with per capita GDP in the former East Germany growing from 43% of that in West Germany in 1990 to 75% in 2018, and its unemployment rate falling from a crest of 18.7% in 2005 to 6.4% in October, not far above Germany’s 5% national unemployment figure.

But the report notes many former East Germans still perceive themselves as second-class citizens, something Chancellor Angela Merkel, who herself grew up in East Germany, had highlighted.

“Official German reunification is complete. But the unity of the Germans, their unity was not fully complete on Oct. 3, 1990, and that is still the case today,” she said last month. “German unity is not a state, completed and finished, but a perpetual process.”

About three months after the Nov. 9, 1989, opening of the Berlin Wall, West German Chancellor Helmut Kohl spoke of wanting quick German reunification — saying it could come as early as 1995, said historian Ilko-Sascha Kowalczuk. 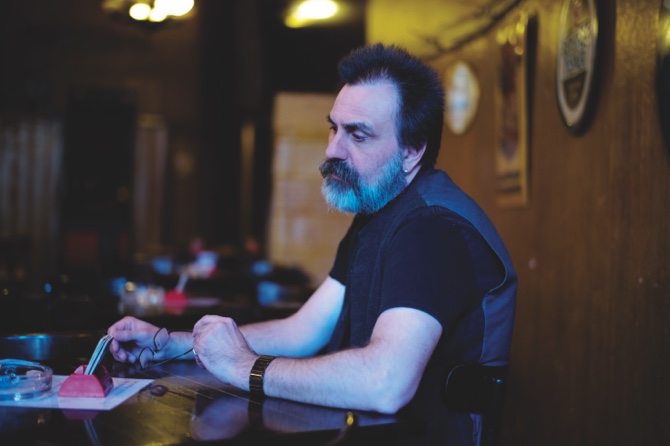 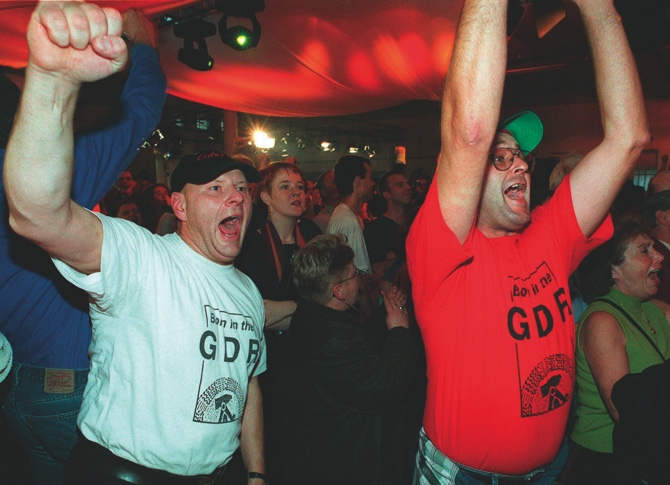 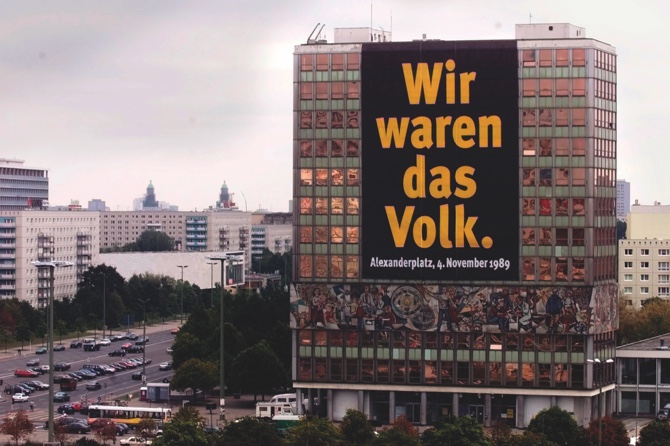 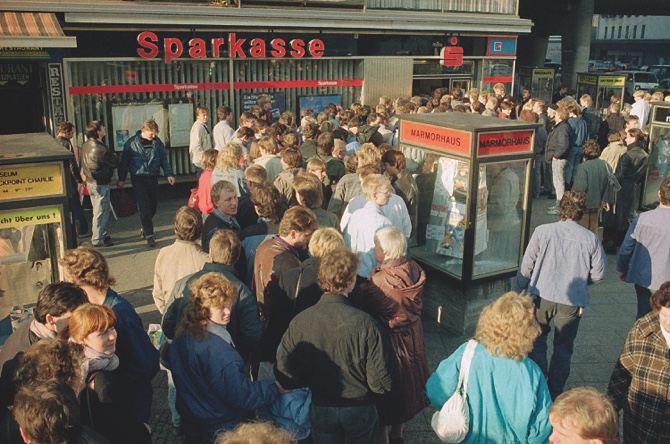 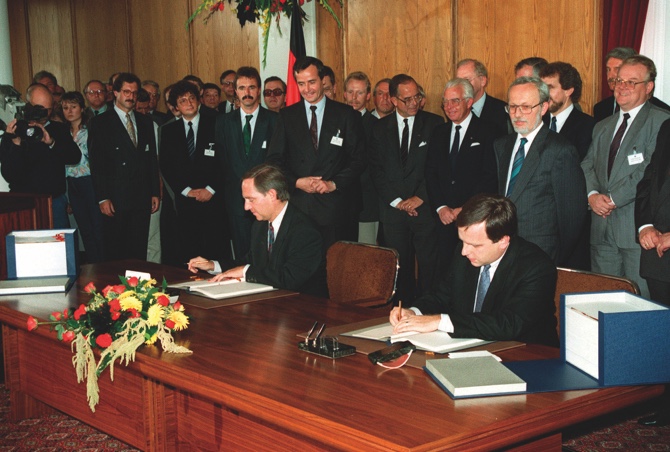 Kohl’s prognosis and famous promise of “blooming landscapes” in the East seemed optimistic to many, who found it hard to believe that the Soviet Union — with a half-million troops in East Germany — would let it happen easily, said Kowalczuk, whose book on reunification, “The Takeover,” was published in German this year.

In fact, reunification came just months later, as much a shock to the 16 million East Germans as to the rest of the world.

The opening of the Berlin Wall was even more abrupt. The first border crossing to open was on Bornholmer Strasse, only a few hundred meters (yards) from the Bornholmer Huette pub.

Gehrhus had gone to bed early that fateful night. When his parents woke him up to tell him what happened, he grumpily told them to “drink a little less” and rolled back over to sleep.

The streets were empty the next morning as he rode his motorcycle to the industrial kitchen where he worked as a cook. When he got there, the doors were open, the lights were on and nobody was there.

“I was standing alone in the kitchen,” he said. “Then it clicked: My parents were telling me the truth.”

After the Wall fell, East Germans voted for the quickest route to unification, buoyed by dreams of freedom and prosperity.

But the rapid transition in about two years from an industrial economy to a service economy was a shock to the system. That was compounded by the move from a communist system, where the state covered child care to old-age care and everything in between, to capitalism, where people could more easily fall through the cracks.

“People thought that they would now be living in a television commercial, in a glossy magazine, many were entirely unprepared to accept that not everything was so shiny in the West, that there were also problems in the West,” Kowalczuk said.

Kohl’s implementation of a monetary union with East Germany — offering a one-to-one exchange rate that far overvalued the eastern mark against its West German counterpart — also had unintended effects.

Citizens welcomed the instant boost to their savings, but East German companies could no longer afford wages and the market for their largely inferior products was destroyed overnight.

That helped spark the exodus of young working people to the West. Still today, only 16 of the country’s top 500 companies by revenue are based in the east, according to a study in Die Welt newspaper, and none of those are on Germany’s flagship stock market index, the DAX.

Gehrhus lost his kitchen job, but the end of communism also removed bureaucratic hurdles that led to him taking over his parents’ pub.

Not everyone had such a soft landing. Many easterners feel they have still not caught up, with 48% of 1,029 voting age residents telling Berlin’s Policy Matters researchers in September that they’re underrepresented in top political positions — despite having an East German chancellor for 14 years. Some 60% said they feel underrepresented in top business roles.

Many in the poll for Die Zeit newspaper recognized some positives — 88% saw improvement in services and goods and 54% thought their overall living standard had improved. But 73% thought their job security was worse and 70% thought protection from crime was worse.

That discontent and other factors have made the eastern region fertile ground for the far-right Alternative for Germany party, even though many of its leaders are from the former West Germany. The party has surged to strong second-place finishes in three eastern state elections this year.

While disparities still exist between the former East and West, economist Stefan Legge said part of the issue with perceptions in the East is that they’re comparing themselves to the former West Germany, Europe’s economic powerhouse, rather than to Europe as a whole.

Figures from last year show all former East German states have reached per capita income at least 75% of the European average, while none of the Eastern European countries like Poland, Hungary and the Czech Republic, which all joined the European Union in 2004, have reached that level nationwide, he said.

“In Germany, the expectation was that after reunification they would achieve some sort of parity with western Germany, and it’s still used as a benchmark,” said Legge, who teaches at the University of St. Gallen in Switzerland but is originally from western Germany.

He suggested that eastern German cities could highlight their lower living costs to appeal to university students, helping expand the educated workforce that startups and other companies want when seeking new locations.

“Don’t give up. There’s a lot that can be done, and you’ve started at a pretty good level,” he said.

Although Gehrhus fondly recalls some parts of East German life, he thinks it’s time for people to quit complaining.

“No matter where I live in this country, I have a roof over my head, I have warm water and cold water from the tap. I can eat. I can go on vacation, whether I go to work or am on welfare,” he said. “We grouse at a really high level.” David Rising, AP