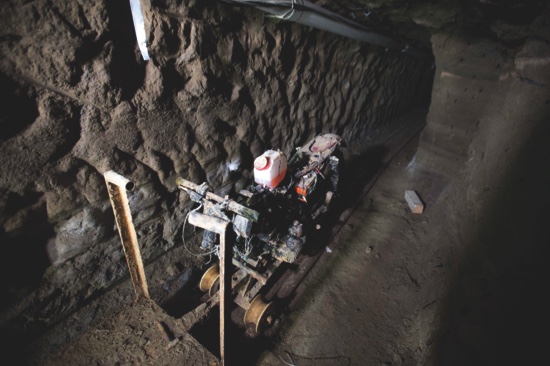 A motorcycle adapted to a rail sits in the tunnel under the half-built house where according to authorities, drug lord Joaquin “El Chapo” Guzman made his escape from the Altiplano maximum security prison in Almoloya, west of Mexico City

Joaquin “El Chapo” Guzman, the most wanted of Mexico’s drug lords, would have breezed along the mile-long tunnel dug just for him on a specially modified motorcycle or one of the two carts it pushed on two steel rails.
A visit this week by journalists to the tunnel’s exit in an unfinished barn near the prison that held Guzman provided a look at the last few yards that the leader of the Sinaloa cartel traversed to make his second escape from a Mexican maximum-security lockup.
Tracks guiding the modified motorcycle end two or three steps from the base of a wooden ladder with 17 rungs that he would have scrambled up. The air in the tunnel is warm and humid and fine dust coats everything. 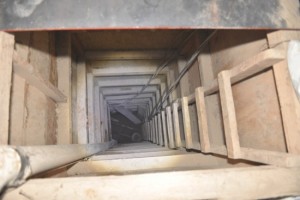 The exit of the tunnel

Reaching the top, a step leads into a small basement dominated by a blue generator as big as a compact car.
Then it is six strides to another ladder.
One, two, three steps up. The air thins. The temperature drops 10 degrees.
Four. Five. Six, the last rung. One more step and Guzman stood on the dusty floor of the barn, where the digging crew had left 4-inch by 4-inch wooden beams, 8-foot- tall coils of steel mesh, gallons of hydraulic fluid, 10-foot lengths of PVC pipe and an electric disc saw.
Seven strides and the man who Mexico’s government said would not repeat his 2001 prison escape stepped through a sliding steel door into the chilly night on the high plain west of the capital.
For the first time since his latest capture, on Feb. 22, 2014, Guzman was a free man.
Authorities also released surveillance video of Guzman’s last moments in prison. A recording by a camera in his cell shows him walking to the bed, where he sits and appears to change his shoes.
He then walks to the shower and toilet area, behind a low dividing wall of about waist height, and simply disappears. Another video filmed after the escape shows the gaping square hole cut into what appears to be the floor of the shower.
The ingenuity and audacity of the caper was breathtaking.
Buy a piece of land a mile from Mexico’s most secure prison, but in the middle of farm fields. Throw up a shoddy, concrete block structure that doesn’t look out of place. Build a wall to hide the dirt. Get to work. 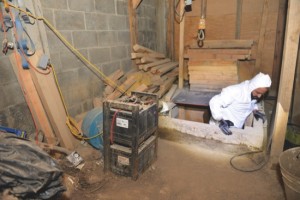 A forensics worker climbs out of the tunnel

Experts have said the tunnel would have been more than a year in planning and building. The digging would have caused noise. The entrance was in a place beyond the view of security cameras at Mexico’s toughest prison.
They also said it was clear the escape by Mexico’s most powerful drug lord must have involved inside help on a grand scale.
Interior Secretary Miguel Angel Osorio Chong conceded as much Monday night. He announced that three prison officials had been fired, including Valentin Cardenas, director of the Altiplano prison 90 kilometers west of Mexico City.
“They had something or a lot to do with what happened, and that’s why we made that decision,” Osorio Chong said.
Still, he did not say who exactly is suspected of aiding the escape. Nor did he talk about rooting out the kind of corruption that led to the escape.
Osorio Chong said the tunnel was 19 meters below the surface and he called it a “high-tech” breach of the prison’s extensive security measures, which include 750 cameras and 26 security filters.
A tunnel of such sophistication – with lights, air venting, and the customized motorcycle rigged up on a rail line – would normally take 18 months to two years to complete, said Jim Dinkins, former head of Immigration and Customs Enforcement’s Homeland Security Investigations. 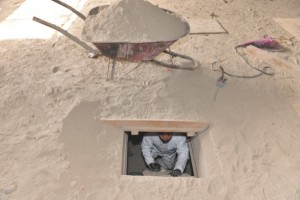 A forensics worker climbs up a ladder leading to the exit

“When it’s for the boss, you probably put that on high speed,” he said.
If anyone was capable of pulling off such a feat, it was Guzman, who is believed to have at least a quarter-century of experience in building large, sophisticated tunnels to smuggle drugs under the U.S.-Mexico border and to escape from hideouts as authorities closed in.
His cartel also has been most successful in coopting officials, said Edgardo Buscaglia, an organized crime expert at Columbia University. “By far they are the most infiltrated in Mexico’s government institutions,” he said.
Experts express skepticism that such an engineering project could go on undetected.
Joe Garcia, who retired this year as interim special agent in charge of U.S. Homeland Security Investigations in San Diego, has extensive experience in tunnel investigations. He said the tunnel at Altiplano was longer than any passage ever found on the U.S.-Mexico border.
To pull off such a feat, rescuers likely had intelligence on the prison even before Guzman was arrested, Dinkins said.
Designers and workers would have needed access to sensitive information such as prison floor plans and alarm and camera systems. And just the noise alone as they bored the final 10-meter vertical shaft directly under the prison to reach Guzman’s cell would have generated some attention.
“It’s not just like someone took a couple tools, shovels and pickaxes. This is a very sophisticated operation,” said Alonzo Pena, a former senior official at U.S. Immigration and Customs Enforcement. “How could they be there and not hear that construction was going on underneath? It’s just impossible.” Christopher Sherman, AP