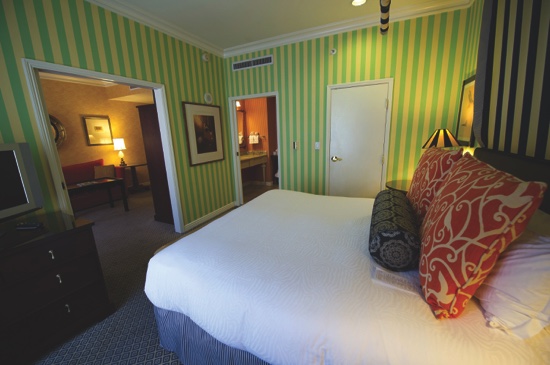 Inside a suite room of the Hotel Monaco in San Francisco

San Francisco already is one of the priciest U.S. cities for apartment renters and companies seeking office space. Now the area has a new distinction: it’s the world’s most expensive place for visitors to spend the night.
The average price for a San Francisco hotel room has jumped 88 percent in the past year to USD397 a night, according to an index compiled by Bloomberg of the world’s top 100 financial centers. The city ranks ahead of Geneva, where rooms set travelers back $292 a night, and Milan, at $271. Chicago, with rates at $240, ties Miami as the second-costliest U.S. cities.
The surge in San Francisco room rates was the biggest among the lodging markets tracked by Bloomberg. The rising costs are being driven by the region’s technology-industry boom, a soaring job market and a dearth of hotel construction as developers focus on office and residential buildings – a combination that’s allowing operators to be aggressive with their pricing.
“The influx of tech companies into San Francisco has been tremendous, and with it this new emerging traveler, this millennial traveler, who is looking for downtown experiences,” said Chuck Pacioni, general manager at the San Francisco Marriott Marquis. “Many of them may travel for work to Silicon Valley, but instead of staying at a suburban hotel, they want to stay in the city for the culture and the experiences.”
The high rates visitors are paying for rooms has enticed investors. Loews Corp.’s lodging unit bought the Mandarin Oriental San Francisco Hotel in April, two months after Hilton Worldwide Holdings Inc. purchased the city’s Parc 55.
San Francisco is one of 25 lodging markets with a year-over-­year increase in room rates, the Bloomberg data show. Chicago had the second-biggest gain, with a 64 percent surge, followed by a 47 percent jump in Milan and a 33 percent rise in Kuala Lumpur.
Among U.S. cities where hotel costs have fallen, New York had the biggest decrease, with a 13 percent decline to an average room rate of $202. In Europe, Paris hotels were among the biggest losers, with a 37 percent drop to $146.
Nightly prices in Budapest fell by more than half, the greatest decline worldwide, to $85. Globally, the cheapest market is Hanoi, Vietnam, where rooms average $62 a night.
The Bloomberg gauge measured 100 cities based on the average daily cost of hotels, regardless of star ratings, for two adults in a double-occupancy room. Rate calculations were taken in May for two blocks of time – Aug. 1 to Aug. 10 of this year and Feb. 1 to Feb. 10, 2016 – to account for holiday, promotion and convention-related pricing. 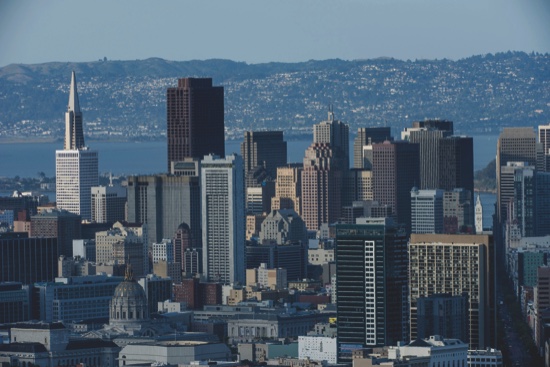 Buildings stand in the skyline of downtown San Francisco

In San Francisco, a booming job market has helped boost the city’s population by 5.9 percent over four years, according to the latest U.S. Census Bureau figures. That compares with a 4.2 percent gain statewide.
The city’s workforce growth has led developers to focus on building office projects, said David Loeb, a lodging analyst at Milwaukee-based Robert W. Baird & Co. More than 8 million square feet (743,000 square meters) of office space is scheduled for development in the next four years, according to CBRE Group Inc. San Francisco may surpass Manhattan as the priciest U.S. office market by the end of this year, the brokerage said this month.
Kilroy Realty Corp. is building a 30-story tower for Salesforce.com Inc. in the city’s booming South of Market neighborhood. Across the street, Boston Properties Inc. and Hines are developing what will be the city’s tallest skyscraper, about 50 percent leased to Salesforce, and Jay Paul Co. is erecting a 684,000-square-foot office and condominium project.
Residential projects are popular, with San Francisco apartment rents averaging $2,280 in the first quarter, twice the national average, according to research firm Reis Inc.
“There’s a ton of office and a ton of residential going up because there’s a lot of job growth,” Loeb said.
While that growth is helping buoy hotel demand, many developers eschew lodging projects because of the high expenses associated with staffing a hotel in San Francisco. The city’s hotel-­room count grew just 0.3 percent in the first five months of the year, compared with a 3 percent increase in New York, according to data compiled by Robert W. Baird.
“If you want to build something in San Francisco today, the economics, such as labor costs and zoning, essentially favor other asset classes,” Loeb said.
The technology industry that so far has helped San Francisco may also prove its weakness should there be a decline in coming years, said Patrick Scholes, an analyst at SunTrust Robinson Humphrey Inc. In the shorter term, the renovation of the Moscone Center convention space is likely to hurt lodging demand, said Pacioni of the Marriott Marquis. He expects 2017 to be the worst year.
“The city is working with groups to keep the impact as low as possible – that’s why it’s taking four years to get done – but it will definitely affect hotel demand,” he said.
Geneva is the priciest city for five-star hotels, which are luxury properties with amenities such as spas, full-service health clubs and signature golf courses, according to Bloomberg data tracking 30 cities. Rooms at hotels in that category average $622 a night in the Swiss city, up 1.3 percent from last year. Los Angeles ranks No. 2, with five-star stays soaring 21 percent to $582.
For the cheapest stay in a five-­star hotel, look to Moscow and Manama, Bahrain. Luxury rooms in those cities average $228 a night. Nadja Brandt, Bloomberg