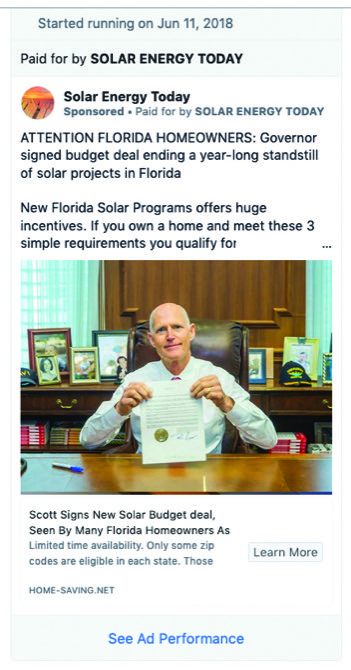 A search result for “solar energy governor” in Facebook’s Ad Archive shows ads that were falsely promising social media users that they could “get paid to go solar,” as seen in the cover picture

The scam ads used photos of nearly every U.S. governor — and sometimes President Donald Trump — to claim that with new, lucrative tax incentives, people might actually make money by installing solar technology on their homes. Facebook users only needed to enter their addresses, email, utility information and phone number to find out more.

While the ads didn’t aim to bilk people of money directly — and it wasn’t possible to buy solar panels through these ads —  they led to websites that harvested personal information that could be used to expose respondents to future come-ons, both scammy and legitimate. It’s not clear that the data was actually used in such a manner.

The fictitious notices reveal how easily scammers can pelt internet users with misinformation for months, undetected. They also raise further questions about whether big tech companies such as Facebook are capable of policing misleading ads, especially as the 2020 elections — and the prospect of another onslaught of online misinformation — loom.

“This is definitely concerning — definitely, it’s misinformation,” said Young Mie Kim, a University of Wisconsin-Madison professor who studied 5 million Facebook ads during the 2016 elections. “I keep telling people: We don’t have any basis to regulate such a thing.”

Experts say websites and apps need to be more transparent about the ads that run on their platforms.

Last year, Facebook launched a searchable database that provides details on political ads it runs, including who bought them and the age and gender of the audience. But it didn’t make that information available for other ads until today [Macau time], when it announced it was expanding the database to include all active ads. Twitter offers its own database of ads and promoted tweets. Google has an archive for political ads only.

The partial approaches allow misleading ads to fester. One problem is the fact that ads can be targeted so narrowly that journalists and watchdog groups often won’t see them.

In mid-March, some websites linked in the fake solar-energy ads disappeared. After complaints from governors’ offices, Facebook inactivated nearly all of the ads and several pages affiliated with them. 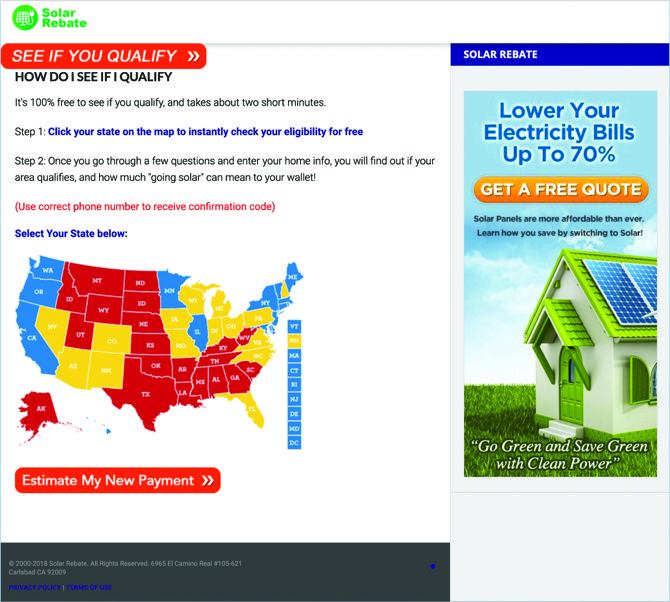 “These scammy ads have no place on Facebook,” company spokeswoman Devon Kearns said in a statement. “We removed these pages and disabled these ad accounts recently and will continue to take action.”

Facebook says it uses an automated process to review the images, text, targeting and position of ads posted to its site. In some cases, employees review the ads. Users can also give feedback if they believe the ads violate company policies.

Governors’ offices were alarmed to see photos of top politicians featured alongside claims such as “you can get paid to go solar.”

Facebook took them down days later, although some continued to re-appear days after that complaint. Facebook also yanked ads featuring images of governors in Texas, Illinois, Colorado, Arizona, South Carolina and other states. But the ads had already been running for some time.

fter researching solar-panel options for his two-story home in Mount Tabor, New Jersey, 37-year-old Chris Fitzpatrick saw the ad last year claiming he might qualify for “free” solar panels because Gov. Phil Murphy planned to release “USD100 million solar incentives.” He was skeptical because none of the solar companies he worked with mentioned such incentives, but worried others might not be.

The Associated Press found that some of these ads directed people to solar-energy websites that listed the same business address — a mailbox in Carlsbad, California — that had been used by a company once under investigation by the Federal Trade Commission, the government’s consumer protection agency. In 2012, the FTC sued Jason Akatiff and his company — then called Coleadium, also known as Ads 4 Dough — for running fake news websites that marketed unfounded health benefits of colon cleanse and acai berry products, according to court records.

Akatiff settled the allegations without admitting guilt and agreed to a $1 million fine. Akatiff changed his company’s name to A4D Inc. in 2015, according to California business filings.

Akatiff did not respond to messages left with his California business.

Though the FTC can investigate fake ads, sue to stop them and seek compensation for victims, thousands of ads targeting select groups run online daily, making it harder to catch suspect advertisers.

Scam ads are popular in certain industries, such as insurance or solar power, where companies are looking for people they can target later for products and services, said Peter Marinello, vice president of the Council of Better Business Bureaus Inc.

The scammers sell the personal information they collect to other companies looking for potential customers, Marinello said. “That’s how this whole process plays out.” Amanda Seitz & Mae Anderson, AP