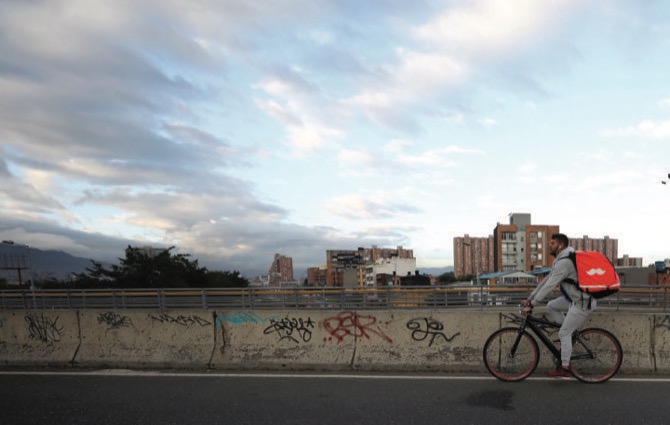 It’s six in the morning and Samuel Romero is already pulling his bicycle out of a small garage.

The 21-year-old Venezuelan migrant turns on his phone and logs on to Rappi, an app through which freelance cyclists get paid to make deliveries around Bogota, a traffic-clogged city of 8 million. He checks his brakes and rides into the chilly streets. It’s the beginning of a 15-hour workday, in which Romero is hoping he can make around $15 — the equivalent of Venezuela’s monthly minimum wage but barely enough to get by in costlier Colombia.

“I am grateful to have some work” says Romero, who arrived in Colombia last year. “But you really have to devote tons of time to this to make any decent money.”

Around the world, immigrants are flocking to digital platforms like Uber, Doordash or Rappi for freelance work, because they offer a quick chance to earn cash in places where newcomers struggle to find regular jobs.

But the gig economy can also be perilous for migrants, who end up working long hours in occupations that provide modest pay, no benefits and few opportunities for career advancement.

In Colombia, which has recently taken in more than 1.3 million Venezuelans fleeing economic hardship, thousands of immigrants like Romero are working on the Rappi platform, mostly delivering small packages to customers who can log into the app to order anything from Chinese takeaway to a box of diapers from the supermarket. 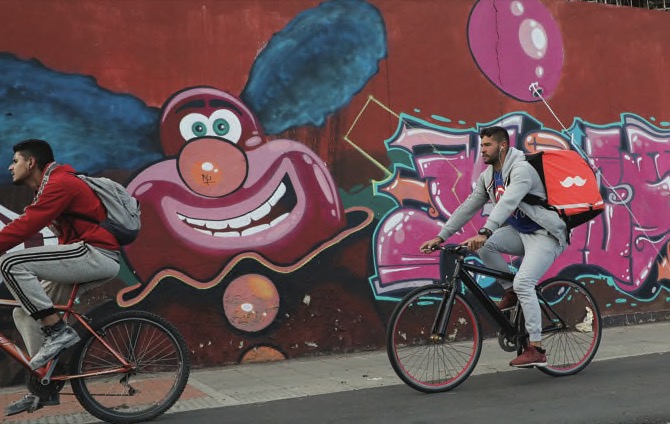 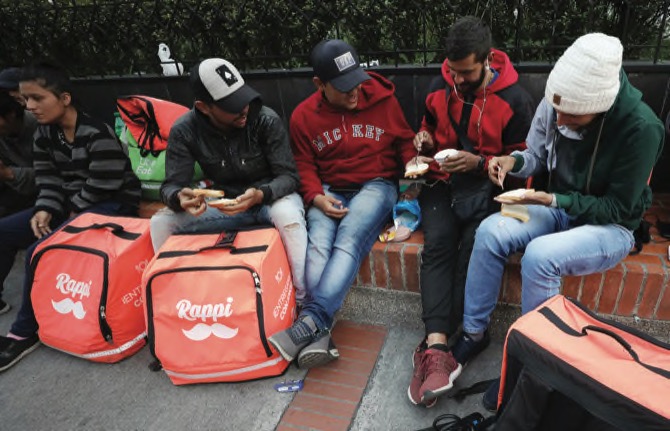 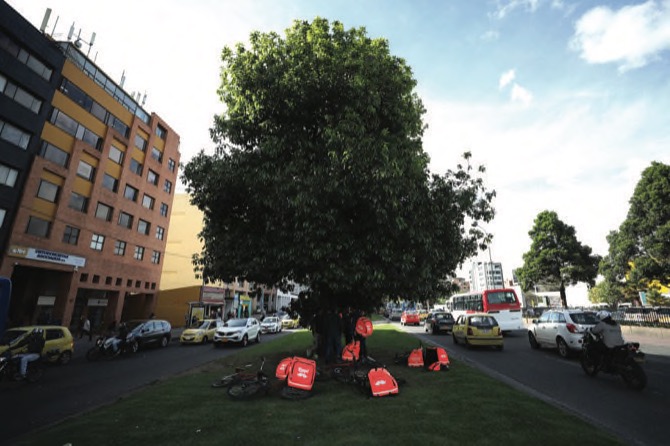 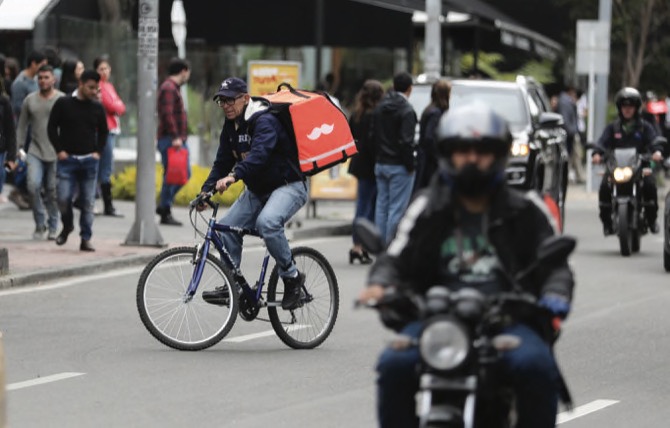 Venezuelan bicycle courier Luis Tarre, 60, takes an order to a customer in Bogota

The app has expanded into eight Latin American countries since it was founded four years ago by a group of young Colombian entrepreneurs, and raised more than $1 billion from venture capitalists, becoming a showpiece for the country’s up and coming tech industry.

But Rappi — like similar companies — has also come under criticism for its modern-day labor practices, which reflect some of the shortcomings of the gig economy.

“This company grew so fast that it forgot about our welfare” said Lina Hernandez, a cyclist who works for Rappi in Bogota, making less than $15 during 12-hour workdays. She recently participated in a protest in front of Rappi’s headquarters, where some couriers set fire to their orange-colored company backpacks to express their anger over the platform’s working conditions.

Rappi pays cyclists in Colombia anywhere from 60 cents to three dollars per delivery, depending on the distance travelled and the time of day in which an order is taken. The couriers are not considered employees and work on a freelance basis, logging into the platform at their convenience.

Company representatives estimate that couriers can make $2.30  to $2.90 per hour during peak times when demand is highest. That’s twice as much as workers on Colombia’s minimum wage make per hour. The company says that its platform is providing work opportunities to more than 18,000 couriers across Latin America.

“This is a platform that allows people to generate additional income, in a flexible manner,” said Alejandro Galvis, Rappi’s chief of staff. “The beauty of this is that through technology we connect two people” enabling cyclists with spare time to serve customers without time to do their own shopping, he explains.

But cyclists in Colombia complain that payments are falling as more freelancers join the platform and compete for each delivery, forcing them to work longer hours to make similar or even smaller amounts of money.

“This was incredible the first three months,” Romero said during a long break in midafternoon, when the app wasn’t sending him any requests for deliveries.  He said that when he joined Rappi in February, he was making almost $22 each day but that his average daily amount had now dropped to about $15. 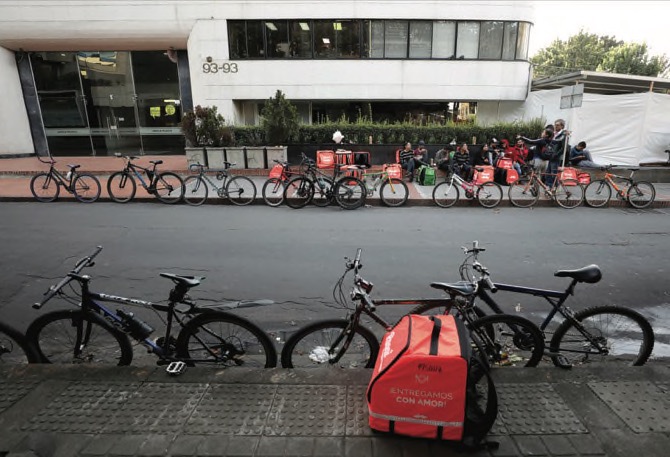 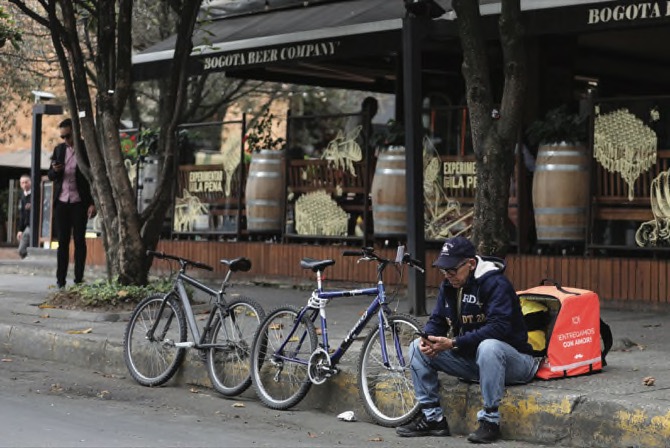 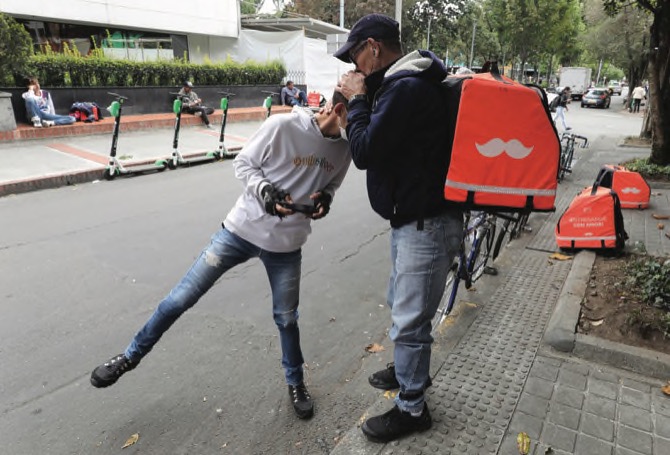 Rappi cyclists also lack benefits that are mandatory for minimum-wage employees, such as health insurance or sick leave. Couriers must also pay for the maintenance of their bikes, and purchase from Rappi an orange backpack that is required to work on the platform.

Company representatives say the couriers are not its employees but “entrepreneurs” who work on their own schedule and use the Rappi app to find customers willing to pay for deliveries. They say the app does not keep any of the money paid for deliveries. Instead it charges retailers a fee for sales made through Rappi.

But many of the Rappi cyclists approached by The Associated Press said they were working on the app for most of the day because they have few other employment options. Critics of the app say a large number of couriers have basically become full-time workers. Lawmakers in Colombia and Argentina are considering regulations to boost protection for the workers.

“Just because these are tech companies, they cannot ignore years of progress in ensuring workers’ rights,” said Mario Valencia, an economist who directs the Center for Labor Studies, a left-leaning Bogota think tank.

But as politicians debate ways to regulate technology apps, a steady supply of migrants, as well as local workers, keeps them running.

Luis Tarre, 60, said he began to make deliveries for Rappi earlier this year because the app does not force him to comply with a demanding schedule.

Tarre ran his own construction company in his home state of Portuguesa in Venezuela. But after business took a sharp downturn, he moved to Colombia with his family, and has had stints working as a building administrator, a waiter, and a construction assistant.

“I had to leave that after a week because my body couldn’t handle it,” he said, waiting for the Rappi app to call him up for a new delivery. “In Rappi, I only work around six hours a day, which is what my legs can handle.”

Tarre’s 20-year-old son, Raul, also works for Rappi, around 14 hours a day, making anywhere from $20 to $30.  His wife has found a job at a restaurant but occasionally works as a Rappi courier on her extra time to bring home some additional income.

omero said it is not uncommon for members of the same household to work on the app.  He lives in a two-story house that has been modified to make several tiny studio apartments. Four other residents of the house work as Rappi couriers, all of them Venezuelans.

“It’s very difficult here to get a job in your own field,” said Romero, who was working in Venezuelan as an engineer for the national oil company. He left because hyperinflation decimated his salary to the point where it was just barely enough to afford food.

Life hasn’t been that much easier in Colombia, though. By 6:30 p.m., it starts to get dark in Bogota, and Romero, after being on the streets for 12 hours, had made only the equivalent of $12 on 10 deliveries.

He said he would stick it out for three more hours, because he needed money to pay his rent, and also to pay off a debt he incurred to fix his bicycle.  The previous bicycle he was using was stolen from him at gunpoint.

“You could say I’m unlucky,” he said, laughing.  “But I do believe that this will just be temporary.”

Romero was trying to get a work visa for Chile, where he had been told by friends that there are more opportunities for professionals like himself.

“Rappi may be my job right now, but I’m not happy with this,” he said. “I want to grow as a person, and move on to something better.” Manuel Rueda, AP