NEWS OF THE WORLD: Vegas offering all but marriage to LGBT tourists 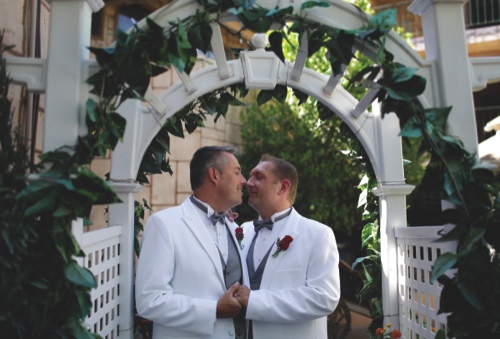 While gay couples still can’t get married in the marriage capital of the world, Las Vegas wants to let them know they — and their money — are more than welcome to the buffet of other activities Sin City has to offer.
The city’s tourism authority recently launched its first mainstream TV campaign aimed at the LGBT community: a commercial featuring a hunk and a heavy dose of innuendo. The first gay nightclub inside a Las Vegas Strip casino opened up this summer.
And casino pools that struggled to distinguish themselves in the high-flying world of day-clubs have found a niche in gay pool parties. 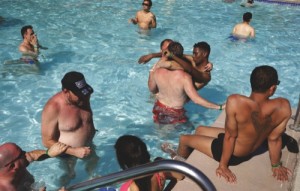 People wade in the pool during “Temptation Sundays” at the Luxor

The efforts have landed the city among the top destinations for gay travelers, who LGBT tourism experts say are more likely to be childless, take more trips and tend to have more disposable income than the average visitor.
But some business leaders fear that Nevada’s same-sex marriage ban is preventing Las Vegas from reaching its true potential among the demographic.
“We have reached a point in the state of Nevada where our current laws governing gay and lesbian marriage have made our most vital industry, tourism, uncompetitive,” said Michael Weaver, senior vice president of marketing for Wynn Resorts.
“Nevada resorts, restaurants, caterers, florists, photographers and musicians all need to be allowed to compete with the 19 other states that allow the freedom to marry,” he said.
While the state’s gay marriage ban winds its way through the courts, Las Vegas’ marketers are losing no time in building up the image of an edgy, LGBT-inclusive adult playground. 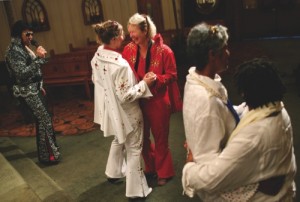 Sari Van Poelje, in red, dances with Katharina during their commitment ceremony given by Elvis tribute artist Michael Conti 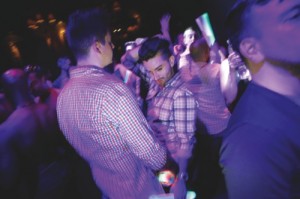 The Las Vegas Convention and Visitors Authority website sidesteps the wedding question and trumpets non-binding commitment ceremonies, honeymoon packages at the Paris casino and musical acts revered among LGBT fans — icons including Cher, Celine Dion and Elton John have held court in town.
And then there’s the suggestive commercial launched this spring that extends the “What Happens Here Stays Here” mantra.
It starts with a man and a woman approaching a Vegas hotel counter together, and then the woman runs off to the bathroom. When a sharply dressed man steps up, the attendant asks if the two men are checking in together.
They give each other the once-over in a moment that suggests “This is Vegas, so (…) maybe?”
“People love that ad,” said Jim McMichael, the diversity and cultural marketing manager of the tourism authority. “It allows people to understand no matter what your background, come to Vegas and have a great time.” 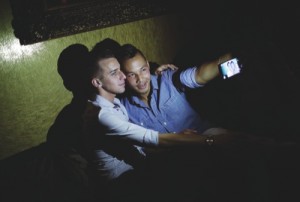 The TV spot, which airs on Bravo and gay-focused cable channel Logo, comes on the heels of a 2012 print ad campaign targeting LGBT travelers. It featured frumpy, middle-aged straight couples enjoying themselves amid a sea of chic gay and lesbian couples.
The tagline? “Everyone’s welcome. Even straight people.”
“With the downturn in the economy, we needed to make sure we were reaching to as many markets as possible,” McMichael explained.
Las Vegas isn’t the only gambling town looking to capture LGBT market share. Atlantic City has promoted itself aggressively in paid and social media as an ideal destination for same-sex weddings, honeymoons and bachelor or bachelorette parties.
Sin City stands as second most popular U.S. vacation destination for gay and bisexual men, behind New York City and tied with San Francisco and Chicago, according to a survey by Community Marketing Inc., a research and consulting firm that studies LGBT consumer habits.
Las Vegas ranks third among lesbian and bisexual women, behind New York City and San Francisco and tied with Chicago, according to CMI. The other cities at the top of the list are more established bastions of LGBT pride. Many boast “Gayborhoods,” such as San Francisco’s Castro District, that date back decades.
“Vegas kind of came out of nowhere in the LGBT market” about five to 10 years ago, according to John Tanzella, president and CEO of the International Gay and Lesbian Travel Association, adding, “They’re creative, they’re cutting edge.” Michelle Rindels, Las Vegas,  AP