News of the World | War gives inspiration to Gaza’s artists 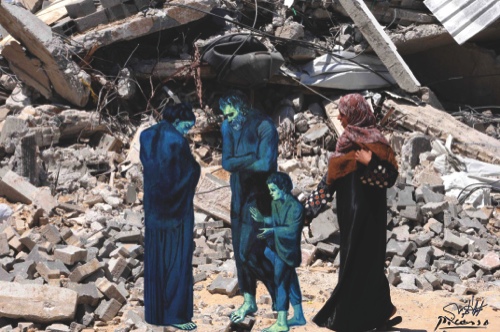 This image made by artist Basel al-Maqosui, shows a collaboration of a famous painting by Spanish painter, Pablo Picasso, paired with a photograph taken by al-Maqosui of a woman walking past a destroyed house after an Israeli Strike hit the Gaza Strip

Palestinian filmmaker Khalil Mozayen’s latest work was already complexly layered — a movie within a movie about a director and screenwriter producing a film about an honor killing in the Gaza Strip.
Then the latest Gaza war burst in to add yet another layer: An Israeli airstrike leveled the 13-story apartment tower where Mozayen’s office, studio and archive were located. So he filmed the mountain of rubble and used it for the final scene of his movie, “Sarah 2014.”
Mozayen had hoped to create a film not connected to the Israeli-
Palestinian conflict. But he and his screenwriter Naim al-Khatib said they decided they couldn’t avoid addressing the war.
“It is like, as a Palestinian, you don’t have the right to have your own dream, that everything in your life has to have something to do with war and (Israeli) occupation,” said al-Khatib, who also plays the fictional screenwriter in the movie. “The occupation crashed our privacy and the war became an integral part of the film’s ending,” he said.
The themes and reality of war impose themselves on Gaza’s small but vibrant arts scene, and the latest war has been a powerful inspiration for its artists in their new work. The 50 days of fighting, which ended with an indefinite truce on Aug. 26, was the deadliest and most ruinous of three such conflicts between Israel and Gaza’s Hamas militant rulers since late 2008. More than 2,143 Palestinians were killed and 100,000 left homeless.
The artists also incorporate the death and destruction into themes drawn from the other realities of life in the tiny Mediterranean coastal strip — a seven-year blockade enforced by Israel and Egypt and the restrictions on freedoms imposed by Hamas on a society that is already deeply conservative. 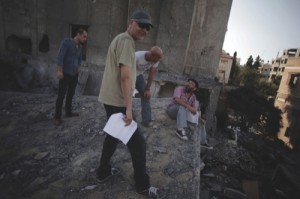 Palestinian filmmaker Khalil Mozayen,second right, speaks with a crew member during a rehearsal for his new movie in Gaza City

Manal Miqdad, a 27-year-old poet, has lived through all those restrictions. She wanted to study music, but there was no place to teach her that, so she joined the information technology department in the Hamas-run Islamic University, where a flowing robe and a headscarf are obligatory for women.
When she fell in love with a colleague and a fellow music buff, she could not be alone with him except on a handful of occasions. Once, plainclothes Hamas security men stopped the couple as they walked together, demanding to know if they were married or related.
After seeing each other for four years, his family prevented them from marrying. His mother, a native of Gaza, objected to her son marrying into a “refugee” family. Miqdad’s family hails from the village of Hamamah, now in Israel, just outside Gaza.
Thrown into depression, Miqdad said she didn’t leave her home for 243 days and attempted suicide twice. Her boyfriend eventually left Gaza. “You cannot love in Gaza, it’s a crime,” she lamented.
She recalled how during the Hamas-Israel war in the winter of 2008-2009, her family fled their home and discovered when they returned that Hamas fighters had stayed in their house during their absence. The fighters left an apologetic note, saying they had taken some honey and eggs.
The house was undamaged except for one item: a piano the family had received as a gift only a month earlier. Miqdad has been playing it just before the family fled. Now the keyboard and strings were ripped apart.
“It was obvious who did that,” she said. Miqdad didn’t elaborate, but music is generally frowned on by hard-line Islamists.
The pain and frustration came out in poetry Miqdad wrote in the latest war. She posted it on social media during the fighting and it quickly spread as online volunteers translated it into English, French and, significantly, Hebrew.
She was so terrified by the bombardment that she hardly left home, cooped up in a hall between the bathroom and the kitchen that the family deemed the safest place. “Security in Gaza is to look for the safest spot in a dangerous place,” she bitterly mused in one of her poems. “In Gaza, how many times must we die to convince life that we deserve one?” she wrote. “And how many miracles do we need to defend our dreams and dignity?”
During the war, painter Basel al-Maqosui wanted to show the world something beyond the death and destruction. “People outside will look at the gruesome images of Gaza’s dead and wounded for a day, maybe two, but not longer,” he said. “I wanted to give the world something they can look at day after day for as long as the war lasted.”
Al-Maqosui normally paints with oil on canvas, but he needed a quicker medium. There was also the question of how to deliver his work to an outside audience amid war and blockade. The answer: Photo collage and social media.
The artist, a 42-year-old father of five, took advantage of the brief reprieves in the fighting to photograph some of the most devastated parts of Gaza. He then paired them with images of some of the world’s most famous paintings by Monet, Cezanne and Picasso and posted them on social media.
His work, along with similar production by other artists, attracted much attention in Gaza and abroad. Al-Maqosui and other artists are partners in Windows From Gaza, a cultural center used as an art gallery and for art courses for children — one of only a handful of galleries in the territory. He and others point to the challenges of being an artist under rule by Hamas.
They recall the suspension for three months in 2010 of a project to give children cameras to take photographs while they investigated it. Eventually, Hamas allowed the project to go on.
“We have learned to be our own censors,” said Shareef Sarhan, a photographer and artist associated with Windows from Gaza. “We set our own ceilings rather than, as artists, push the boundaries of artistic expression.”
The filmmaker Mozayen said he intended for “Sarah 2014” to be a look at women’s rights in a deeply patriarchal society and more universal issues of human suffering —
to tell the world “that we are human and have human issues like everyone else.”
Made on a shoestring budget of USD220,000, “Sarah 2014” tells the story of a film director, played by actor Jamal Abu Komsan, and a script writer, played by al-Khatib, cooperating on a movie about a Gaza woman who disappeared, most likely killed by her family for entering at relationship with a married man.
When the strike, only hours before the Aug. 26 truce, flattened the apartment tower, Mozayen went to film the site. Last week, he climbed up the rubble on a ridge-like section 20 meters up. “This is a godsend. Hollywood producers would pay millions for a location like this and I got it for free,” he quipped. The final scene twists the movie within a movie and reality versus fiction.
The director and screenwriter stand in front of the huge pile of wreckage, arguing over whether to include the images of the war’s destruction in the final scene of their movie. The screenwriter argues against it, complaining the film is being pulled away from its intended subject.
“Man, I wish I could be an ordinary human being for once. Someone whose pain is caused by normal causes,” he tells the director. “I am fed up with being a Palestinian.” Hamza Hendawi, Gaza Strip, AP