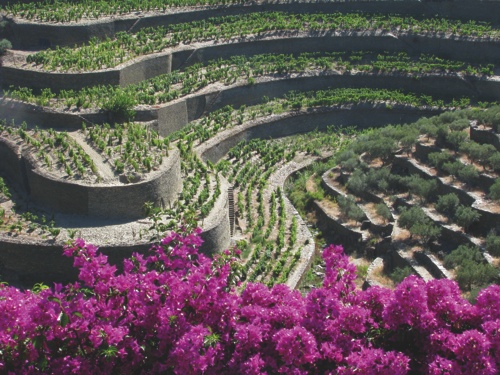 Ribbons of bright green grape leaves alternated with golden stone walls as far as I could see along the steep banks of Portugal’s Douro River. Cantilevered steps led up hand-stacked dry stone walls to narrow ledges, where the schist rock had been crumbled, also by hand, to make the soil. The terraces, planted with rows of vines, basked in the early summer sunshine.
Tony Smith was showing me around his Quinta da Boa Vista estate outside the winemaking town of Pinhao, with 42 kilometers of walls, some 9 meters tall, supporting vines at least 80 years old.
“Vines thrive when they suffer a bit,” he said. No kidding. These mountain-hugging terraced vineyards produce one of the most recognizable wines in the world and the most visible export of this economically struggling country: Port, or vinho do Porto in Portuguese, from its namesake harbor city at the Douro’s estuary, 130 kilometers downriver from Pinhao.
In June, on my fourth trip to the region, I explored the port cellars in Vila Nova de Gaia (often simply called Gaia), the city on the opposite riverbank from Porto, and then drove up the Douro to visit three vineyards near the towns of Baiao and Pinhao.
Holding a glass of 20-year tawny port at the Ramos Pinto lodge in Gaia, the house head winemaker and general manager Joao Nicolau de Almeida smiled at the dark amber swirls.
“The most humanized wine,” he called it, because, from stone-breaking to the constantly changing blends over years, it’s “people’s work, not just nature’s.”
Tawny was De Almeida’s first wine – at age 6 at his parents’ dinner table – and first school break job, when his father sent him to work in the family warehouses as punishment for bad grades. Over the last 30 years, De Almeida has been a leader in studying and modernizing Douro winemaking.
The story of port, just like the resilient Douro grapes of which it’s a blend, continues to be one of human creativity.
“Port-tonic?” a waiter offered as I sailed the Douro between the monument-crammed historic center of Porto and the wine cellars directly across the river in Gaia during the St. John’s Day regatta of rabelos, the traditional boats that were used to transport wine barrels. 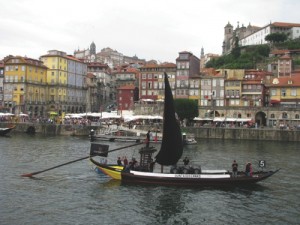 A rabelos boat, which were used to transport port wine from the vineyards down to Gaia, on the Douro river in front of Porto’s historic Ribeira district

The trendy cocktail, made with white port, seeks to attract younger drinkers, said Rui Cunha, a Porto-based winemaker and great-grandson of Adriano Ramos Pinto, the house founder.
Already in the late 19th century, he commissioned risque Art Nouveau advertisements of port as “a temptation,” including a glass-holding snake slithering up Eve as Adam watches. The ads are on view at the company’s museum.
But for all its indulgent luxury reputation, port’s origins are backbreakingly earthy, stemming from rocky, steep terroir that couldn’t be more different from the gently rolling hills of Bourgogne, Chianti and Napa.
Because vines need little water and can grow where little else will, Romans and then 12th-century Cistercian monks cultivated them along the upper Douro, which flows to the Atlantic from northern Spain (where, called Duero, it also waters celebrated vineyards).
In the 1600s, English traders deprived of French wines turned to Portuguese producers, and, one story goes, added brandy to the full-bodied reds to preserve them on their sea voyage – making port.
By the mid-1700s, parts of the Douro valley – beginning near the town of Peso da Regua, about 100 kilometers upstream from Porto – became a demarcated region, its vines and wines highly regulated to protect indigenous grapes like the prized touriga nacional.
The landscape was unchanged until the 1980s, when port shipping companies started buying land upstream and innovators like De Almeida introduced vertical planting and larger terraces alongside the traditional ledges to mechanize some of the work.
The latest trend has been bringing Douro winemaking closer to its country roots. The same Douro grapes blended for port are now being used for quality-certified table wines with a more universal, and inexpensive, appeal.
As you travel upriver from Porto, just before the Douro region you cross the southernmost corner of another Portuguese demarcated wine zone, the generally cooler and wetter vinho verde one. In the granite hillsides around Baiao and Regua, it produces mostly a dry, mineral white.
“Vinho verde is a growing segment,” being less alcoholic and a better fit with light foods, said Smith, whose other quinta, Covela, makes two kinds.
During a Saturday lunch at Bom Retiro, Ramos Pinto’s quinta near Pinhao, friends and I used bacalhau, roast beef, Serra da Estrela cheese and custard as excuses to try five bottles – white port, white and red wine, and vintage and 20-year tawny port.
The latter’s flavor lingered in my mouth like an exquisitely buzzy blend of caramel and dried nuts. All around me were the grapes that went into my glass, hand-picked from plants growing on those hot hand-carved stone terraces – monuments to a grueling feat of human ingenuity well worth toasting, even if you only drink water. Giovanna Dell’Orto, Pinhao, AP

The harbor city of Porto, Portugal — http://www.visitporto.travel — has an international airport. River boats and trains from Porto to the winemaking region around Pinhao, about three hours away by rail, provide vistas of the Douro’s vineyards, but a car is essential to tour the dozens of quintas; http://www.ivdp.pt and http://www.covela.pt . For port lodges in the city of Gaia see http://www.cavesvinhodoporto.com. You can fit a Douro quinta visit on a day trip from Porto; a fascinating midway stop is the Foundation Eca de Queiroz, the house-museum of one of Portugal’s celebrated novelists that now also has a restaurant featuring dishes from de Queiroz’s times, http://www.feq.pt .