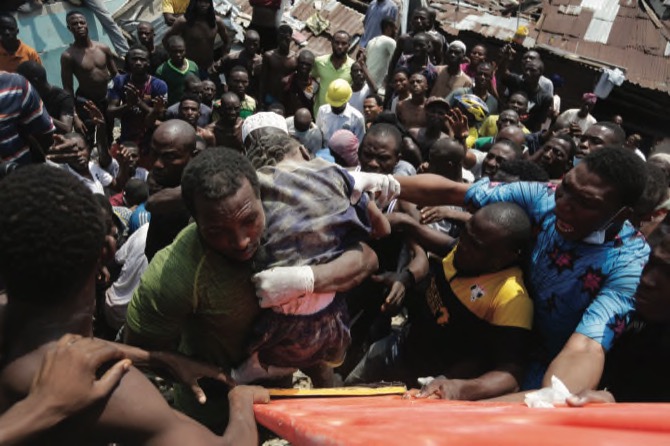 Emergency crews sifted through debris as night fell on frantic efforts to rescue scores of school children and others feared trapped inside a three-story building that collapsed Wednesday in Nigeria’s densely populated commercial capital, Lagos. At least eight people were confirmed dead and 37 others were rescued alive.

Anguished families crowded around the flattened remains of the building, which housed an elementary school, holding out hope that more children would still be found alive in the wreckage.

Scenes of jubilation erupted earlier in the day when a man was brought out alive. But the mood shifted dramatically an hour later when another man was brought out dead. The rescue of a woman carried to an ambulance on a stretcher was greeted with cries of, “She’s not dead!” in the local Yoruba language.

The evening call to prayer could be heard as hundreds anxiously waited in the city’s Ita Faji neighborhood trying to help in rescue efforts. Using flashlights, some people pulled what looked like clothing from the ruins. In the crowd, a baby cried.

As many as 100 children had been in the primary school on the building’s top floors, witnesses said.

“It touches one to lose precious lives in any kind of mishap, particularly those so young and tender,” Nigerian President Muhammadu Buhari said.

Earlier, Associated Press video showed rescuers in yellow vests carrying dust-covered, stunned-looking children from the rubble, to cheers from hundreds who had rushed to the scene. But the crowd quieted as others were pulled out slung over rescuers’ shoulders, unmoving.

The children were hurried to ambulances. One man pressed his hands to a passing survivor’s head in blessing.

More equipment was brought in as nightfall approached. National Emergency Management Agency spokesman Ibrahim Farinloye said 37 people had been pulled out alive, while eight bodies were recovered from the ruins. An unknown number remained missing.

It was not immediately clear why the building collapsed, but such disasters are all too common in Nigeria, where new construction often goes up without regulatory oversight and floors are added to already unstable buildings.

Lagos state Gov. Akinwunmi Ambode said the building, which had been marked for demolition, was classified as residential and the school was operating illegally on the top two floors.

He promised a full investigation once rescue operations were concluded and vowed that those responsible would be prosecuted. Sam Olukoya & Carley Petesch, Lagos, AP