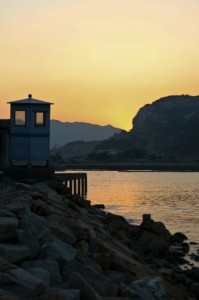 Authorities are still searching for nine suspected mainland illegal immigrants and a smuggler who went missing after a speedboat capsized in waters off Hengqin.
The vessel, registered in Hong Kong, sank as it carried illegal immigrants  who had either been in Macau or Hong Kong.
Wang Shiyun, deputy head of the Zhuhai Maritime Affairs Bureau, said yesterday that a man who was rescued on Tuesday morning told rescuers that he was with nine others when the seven-meter long
boat capsized at around 4 a.m. as they attempted to enter Zhuhai from Macau illegally.
The man was rescued by a fisherman, having been adrift in the water on an empty oil barrel for four hours.
Wang said that rescue vessels found the boat and pulled it ashore on Tuesday. However, no traces of survivors have been found.
He said that the bureau yesterday had dispatched helicopters and seven patrol vessels to expand the search areas to find those still missing.
Information suggests that the nine missing passengers consisted of eight men and one woman. One of them was a crewmember, while those remaining were all from the mainland.
It is reported that the boat was only designed to carry four people.
Authorities suspect that the accident was caused by the vessel’s propeller becoming entangled with a fishing net.
They added that those missing were likely to have survived the accident, as it took place near the coast.
Six of the passengers were also reported to have life vests.
Macau Customs Service (SA) learnt the news yesterday morning through communication with the mainland authorities. SA claimed that it had already obtained information on the location where the people boarded the speedboat.
It promised to establish communications with the mainland authorities and to follow up the incident.
The head of SA’s department of operational management, Chao Chak Sam, revealed that the bureau has caught 258 illegal immigrants in the first eight months of this year, similar to previous years.
Mr Chao said that illegal immigrants would constantly change the locations of embarkation and disembarkation in order to avoid the law enforcement agencies. They would also adopt different camouflaging strategies.
As a result, it is very challenging for the SA officials to operate during night-time.
“It is impossible for [the SA] to dispatch personnel at every single location. [In fact], we have successfully caught many. As for whether there are loopholes, I can’t say. But for law enforcers, [we] are always playing a game of cat and mouse,” he said.
Chao Chak Sam added that SA has already communicated with mainland departments in order to strengthen their law enforcement and deployment, as well as learning from the experience.
Illegal immigration and people smuggling between Macau and the mainland is not uncommon throughout the years.
During an operation at the beginning of this year, SA officials fired four warning shots when chasing illegal immigrants at the exit of Long Chao Kok trail in Coloane. Three illegal immigrants who had travelled to the location from Hengqin in a speedboat were arrested in that operation.
Another arrest was made in May after a man was caught trying to transport a female illegal immigrant from mainland to Macau using a motorboat.
The pair was spotted and intercepted by an SA patrol vessel as they attempted to disembark near Avenida da Ponte da Amizade. MDT/Agencies