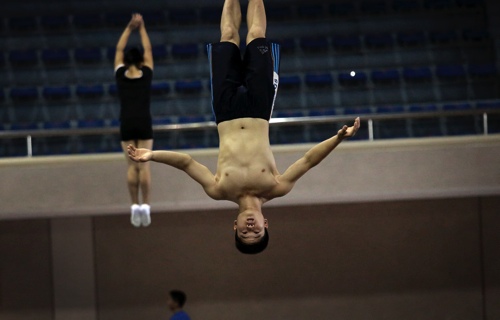 It’s a hot, sunny morning at the newly refurbished Sosan Football Stadium in Pyongyang. Two women’s soccer teams head to the sidelines of the artificial turf, leaving only a row of archers to continue their practice before several senior sports ministry officials. So sure are they of their aim — or, perhaps, so impromptu is the decision to have them shoot here — that there are no barriers behind the targets, posted on simple squares of straw.
The archers have a lot of responsibility on their shoulders. In just over a week, they will be sent on a mission to win gold for their leader in what could well be the biggest sporting event of their lives and a major propaganda campaign for their nation — the Asian Games in Incheon, South Korea.
The games, a kind of mini-
Olympics held every four years, come after months of haggling between the two Koreas over everything from national flags to the North’s outrage over joint military exercises by South Korean and U.S. troops, which it has called a rehearsal for nuclear war.
But the event also comes as the North is making a strong push to develop itself into a sporting nation reminiscent of East Germany and other socialist nations during the Cold War. North Korean leader Kim Jong Un has poured funds into improving sports facilities in the capital and, on a smaller scale, the provinces, giving momentum to what the state-run media has frequently touted as a “hot wind of sports” blowing across the nation.
Every spring, Pyongyang hosts an international marathon. But unable to lure any major international events to its own cities, the North is sorely aware that its southern rivals are currently running away with the game of sports diplomacy. In the meantime, they hope that doing well in Incheon might help them win some of the spotlight back.
Sports officials and former athletes who spoke to The Associated Press at Pyongyang’s “Sports Village” — a block of shiny, well-maintained training venues near the Sosan stadium that range from table tennis to taekwondo — made no effort to play down Incheon’s political overtones.
“I want to say to each of our athletes that from the moment they leave our country they must never forget the fatherland,” Choe Myong Sim, who was the national coach for North Korea’s rhythmic gymnastics team for 30 years after represented her country many times abroad as an athlete.
“Ideological motivation is what is most important,” she said as she watched her up-
and-coming gymnasts practice. “Our players are training and competing under the warm care and love of Marshal Kim Jong Un. They will not forget that.”
North Korea’s road to Incheon has been a rocky one.
Negotiations over sending the delegation have been fraught with disputes and until last month it appeared the North might be a no-show, as talks with Seoul broke down because of disputes over the size of its delegations and national flags.
Vulnerable to the ever-shifting winds of international politics, it is never a given that North Korean athletes — no matter how good they are — will be allowed to compete in major competitions abroad. North Korea boycotted the 1986 Asian Games and the 1988 Summer Olympics, both in Seoul, though it has attended several big events in the South since then.
Son Kwang Ho, vice chairman of the North’s Olympic Committee, ended the uncertainty by announcing last week that his country will send 150 players, coaches, referees and other people to take part in 14 events in the games, set for Sept. 19 to Oct. 4.
But the North angrily announced that it won’t send a team of cheerleaders, dubbed the “squad of beauties,” that has infatuated South Korean audiences in past years. Kim Jong Un’s wife herself was a member of the squad in 2005, according to South Korean officials.
Seoul reportedly balked at spending millions of dollars to cover their costs at the games. North of the border, the decision is generally blamed on Seoul’s own style of mixing sports with politics.
“The cheering squad should not be seen as a political issue. It’s just about supporting sports,” said Jong Ok Mi, a former national team rhythmic gymnast who has competed overseas and inspired a North Korean movie. “The way South Korea has made this into a political issue makes me so angry. Incheon is our territory. We are the same blood, the same people. I’m a sportsperson, so I wonder why we have to be separate. I wanted to have unified team, but it’s very sad that we are divided into two teams.”
North Korea is expected to do well in weightlifting, table tennis, judo, football and archery.
If they do, former soccer star Kim Sun Hui said, they can rest assured that the leader himself will be taking note.
“My best experience was competing in an all-star team in the United States in 1999,” she said. “I was so happy to think that maybe our leader was watching me, and that the whole world was watching me represent my nation. Marshal Kim Jong Un has inspected the training of both the men’s and women’s teams, so I’m sure they are trying their best to get the gold medal.” AP