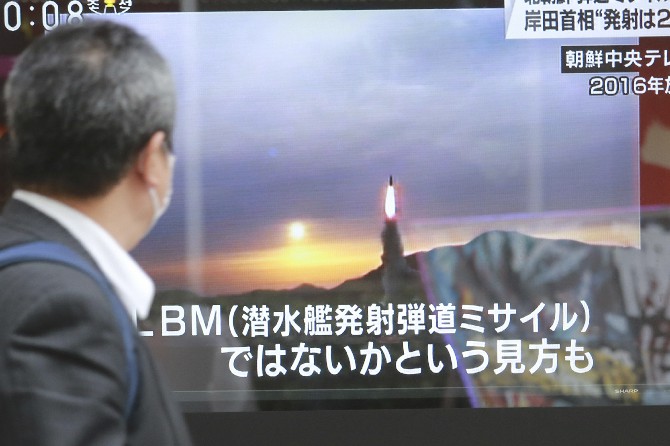 North Korea yesterday fired at least one ballistic missile, which South Korea’s military said was likely designed to be launched from a submarine, in what is possibly the most significant demonstration of the North’s military might since U.S. President Joe Biden took office.
The launch of the missile into the sea came hours after the U.S. reaffirmed an offer to resume talks on North Korea’s nuclear weapons program. It underscored how North Korea has continued to expand its military capabilities during the pause in diplomacy.
South Korea’s Joint Chiefs of Staff said in a statement it detected that North Korea fired one short-range missile it believed was a submarine-launched ballistic missile from waters near the eastern port of Sinpo, and that the South Korean and U.S. militaries were closely analyzing the launch.
The South Korean military said the launch was made at sea, but it didn’t say whether it was fired from a vessel underwater or another launch platform above the sea’s surface.
Japan’s military said its initial analysis suggested that North Korea fired two ballistic missiles. Prime Minister Fumio Kishida said officials were examining whether they were submarine-launched.
Kishida interrupted a campaign trip ahead of Japanese legislative elections later this month and returned to Tokyo because of the launch. He ordered his government to start revising the country’s national security strategy to adapt to growing North Korean threats, including the possible development of the ability to pre-emptively strike North Korean military targets.
“We cannot overlook North Korea’s recent development in missile technology and its impact on the security of Japan and in the region,” he said.
Japanese Defense Minister Nobuo Kishi said one of the North Korean missiles reached a maximum altitude of 50 kilometers and flew on “an irregular trajectory” while traveling as far as 600 kilometers. He said the missile didn’t breach Japan’s exclusive economic zone set outside its territorial waters.
South Korean officials held a national security council meeting and expressed “deep regret” over the launch occurring despite efforts to revive diplomacy. A strong South Korean response could anger North Korea, which has accused Seoul of hypocrisy for criticizing the North’s weapons tests while expanding its own conventional military capabilities.
The apparent site of the missile firing — a shipyard in Sinpo — is a major defense industry hub where North Korea focuses its submarine production. In recent years, North Korea has also used Sinpo to develop ballistic weapons systems designed to be fired from submarines.
North Korea last tested a submarine-launched ballistic missile, or SLBM, in October 2019.
Analysts had expected North Korea to resume tests of such weapons after it rolled out at least two new submarine-launched missiles during military parades in 2020 and 2021. There have also been signs that North Korea is trying to build a larger submarine that would be capable of carrying and firing multiple missiles.
Japanese Deputy Chief Cabinet Secretary Yoshihiko Isozaki said Tokyo lodged a “strong protest” to North Korea through the “usual channels,” meaning their embassies in Beijing. Japan and North Korea have no diplomatic ties.
Chinese Foreign Ministry spokesperson Wang Wenbin said tensions on the Korean Peninsula were at a “critical stage” and called for a renewed commitment to a diplomatic resolution of the issue.
Ending a monthslong lull in September, North Korea has been ramping up its weapons tests while making conditional peace offers to Seoul, reviving a pattern of pressuring South Korea to try to get what it wants from the United States.
North Korean leader Kim Jong Un is “developing submarine-launched ballistic missiles because he wants a more survivable nuclear deterrent able to blackmail his neighbors and the United States,” said Leif-Eric Easley, a professor of international studies at Ewha Womans University in Seoul.
Easley said North Korea “cannot politically afford appearing to fall behind in a regional arms race” with its southern neighbor.
“North Korea’s SLBM is probably far from being operationally deployed with a nuclear warhead,” he added.
North Korea has been pushing hard for years to acquire an ability to fire nuclear-armed missiles from submarines, the next key piece in Kim Jong Un’s arsenal that includes a broad range of mobile missiles and ICBMs with the potential range to reach the American homeland.
Still, experts say it would take years, large amounts of resources and major technological improvements for the heavily sanctioned nation to build at least several submarines that could travel quietly in seas and reliably execute strikes.
Within days, Biden’s special envoy for North Korea, Sung Kim, is scheduled to meet with U.S. allies in Seoul over the prospects of reviving talks with North Korea.
Nuclear negotiations between the U.S. and North Korea have stalled for more than two years because of disagreements over an easing of crippling U.S.-led sanctions against North Korea in exchange for denuclearization steps by the North.
While North Korea is apparently trying to use South Korea’s desire for inter-Korean engagement to extract concessions from Washington, analysts say Seoul has little wiggle room because the Biden administration is intent on keeping sanctions in place until North Korea takes concrete steps toward denuclearization.
“The U.S. continues to reach out to Pyongyang to restart dialogue. Our intent remains the same. We harbor no hostile intent toward (North Korea) and we are open to meeting without preconditions,” Sung Kim told reporters on Monday.
Last week, Kim Jong Un reviewed powerful missiles designed to launch nuclear strikes on the U.S. mainland during a military exhibition and vowed to build an “invincible” military to cope with what he called persistent U.S. hostility. Earlier, Kim dismissed U.S. offers to resume talks without preconditions as a “cunning” attempt to conceal its hostile policy toward the North.
The country has tested various weapons over the past month, including a new cruise missile that could potentially carry nuclear warheads, and a developmental hypersonic missile.
The U.S. Indo-Pacific Command said North Korea’s latest launch did not pose an immediate threat to U.S. personnel, territory, or that of its allies. KIM TONG-HYUNG, HYUNG-JIN KIM & MARI YAMAGUCHI, SEOUL, MDT/AP