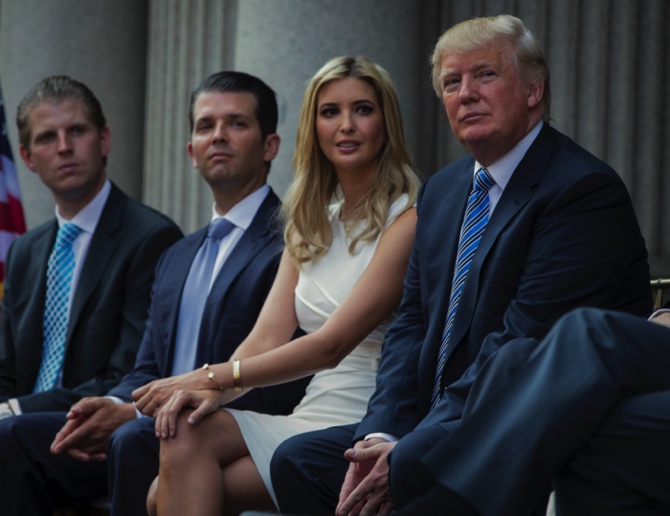 Donald Trump sits with his children, (from left) Eric Trump, Donald Trump Jr., and Ivanka Trump during a groundbreaking ceremony for the Trump International Hotel (2014)

The lawsuit seeks to strike at the core of what made Trump famous, taking a blacklight to the image of wealth and opulence he’s embraced throughout his career — first as a real estate developer, then as a reality TV host on “The Apprentice” and “Celebrity Apprentice,” and later as president.

James, a Democrat, announced details of the lawsuit at a news conference yesterday. The case showed up on a court docket yesterday morning.

James said Trump “falsely inflated his net worth by billions of dollars.”

The goal, the attorney general’s office has said, was to burnish Trump’s billionaire image and the value of his properties when doing so gave him an advantage, while playing down the value of assets at other times for tax purposes.

“This investigation revealed that Donald Trump engaged in years of illegal conduct to inflate his net worth, to deceive banks and the people of the great state of New York,” James said at the news conference. “Claiming you have money that you do not have does not amount to the art of the deal. It’s the art of the steal.”

James is seeking to remove the Trumps from businesses engaged in the alleged fraud and wants an independent monitor appointed for no less than five years to oversee the Trump Organization’s compliance, financial reporting, valuations and disclosures to lenders, insurers and tax authorities.

She is seeking to replace the current trustees of Trump’s revocable trust, which controls his business interests, with independent trustees, to bar Trump and the Trump Organization from entering into commercial real estate acquisitions for five years, from obtaining loans from banks in New York for five years and permanently bar Trump and three of his adult children from serving as an officer or director in any New York corporation or similar business entity registered and/or licensed in New York State.

She also seeks to permanently bar Weisselberg and McConney from serving in the financial control function of any New York corporation or similar business entity registered and/or licensed in New York State.

Alina Habba, an attorney for Trump, said the lawsuit “is neither focused on the facts nor the law — rather, it is solely focused on advancing the Attorney General’s political agenda.”

“It is abundantly clear that the Attorney General’s Office has exceeded its statutory authority by prying into transactions where absolutely no wrongdoing has taken place,” Habba said.

James’ lawsuit comes amid a swirl of unprecedented legal challenges for a former president, including an FBI investigation into Trump’s handling of classified records and inquiries into his efforts to overturn the 2020 election. MDT/AP