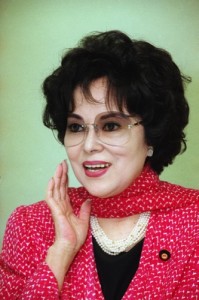 Japanese film idol Yoshiko Yamaguchi, who was known as Rikoran and symbolized Japan’s wartime dreams of Asian conquest, has died at age 94.
Known as Shirley Yamaguchi in the U.S. and one of biggest Japanese film stars during and after World War II, Yamaguchi died of heart failure Sept. 7, according to Japanese public broadcaster NHK.
Born to Japanese parents in northern China in 1920 and raised in Japan’s wartime puppet state Manchukuo, Yamaguchi was adopted by a Chinese friend of her father and was renamed “Xianglan,” or “Fragrant Orchid,” when she was 13.
She debuted as Chinese singer Li Xianglan — Rikoran in Japanese — and starred in Chinese-language films made by the Japanese-run Manchurian Cinema Association, many of them propaganda movies. During its militaristic march across Asia in the first half of the 20th century, Japan operated coal mines and railroads and forced China’s last emperor, Pu Yi, to be head of a puppet government in Manchuria, which the Japanese called Manchukuo.
Widely believed to be Chinese, Yamaguchi was a star in Asia, particularly in Japan. “Yue Lai Xiang,” one of her best known songs, is still popular among Chinese singers. In the movie “Song of the White Orchid,” she depicted a young Chinese woman who falls in love with a Japanese man after her family is killed by the Japanese.
Chinese authorities arrested Yamaguchi after the war and accused her of being a Chinese traitor. But a friend produced family records proving her Japanese origin, saving her from execution. She apologized for her duplicity and was allowed to leave China.
After the war, Yamaguchi appeared in two Hollywood films and on Broadway during the 1950s. At home, she starred in Akira Kurosawa’s film “Scandal,” Seijun Suzuki’s “Escape at Dawn” and other movies.
She then largely withdrew from the silver screen, but the story of her dramatic life was made into dramas and musicals that are performed even today. Her 1987 autobiography “Half My Life as Rikoran” was a best-seller.
After her first marriage to Japanese-American sculptor Isamu Noguchi ended in the mid-1950s, Yamaguchi married Hiroshi Ohtaka, who was Japan’s ambassador to Burma, now Myanmar, and occasionally appeared on television. In 1974, she was elected to parliament’s Upper House as a member of the governing Liberal Democratic Party and served until 1992. She was among the contributors to a private atonement fund for Asian “comfort women” used as prostitutes for Japan’s wartime military. Mari Yamaguchi, Tokyo, AP