Official says beer bars are too hot in Vietnam 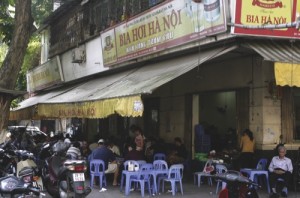 A ministry official is proposing that the temperature in restaurants selling beer in Vietnam should not exceed 30 degrees Celsius, a rule that will be hard to enforce considering outdoor beer parlors are hugely popular in the country’s big cities.
Yesterday’s Tuoi Tre newspaper quoted Nguyen Phu Cuong, an official at the Ministry of Industry and Trade which was drafting the regulation, as saying the rule aims to “protect consumers.”
Many drinkers, however, say the proposal shows how out of touch officials are because of the popularity of the outdoor bars.
“The rules are not realistic,” said Nguyen Van Dan, 55, an engineer, who was sipping draught beer with salad and chicken at an outdoor beer parlor in downtown Hanoi. “They just can’t force us to drink beer in air-conditioned rooms.”
Tran Ngoc Son, 51, a businessman who was drinking beer with beef and peanuts at the same restaurant said drinking beer in outdoor restaurants was the “culture” for many Vietnamese.
“We just enjoy our beer at outdoors parlors much better than in air-conditioned places,” he said “We don’t need the government to take care for our health.”
Last year, Vietnam’s 90 million people consumed 3 billion liters of beer, or 33.3 liters per head, making them the top beer drinkers per capita in Southeast Asia. AP