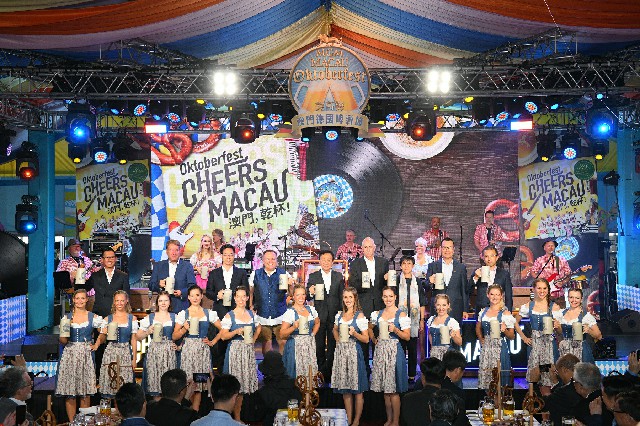 Oktoberfest Macau at MGM2019 officially kicked off yesterday at MGM Cotai.
The annual 11-day Bavarian celebration presents an array of traditional German brews and food under the gigantic beer tent, to the singing of “Nei Hou, Macau!” with the Högl Fun Band.
“Macau has many great traditions and events, and we are very proud that Oktoberfest at MGM has become one of the most anticipated events for our local community as well as tourists,” said CEO and executive director of MGM China Holdings Limited, Grant Bowie.
“In the future, MGM is going to offer more exciting and diverse activities to enrich Macau’s tourism offerings, with the aim of strengthening Macau’s position as the World Center of Tourism and Leisure,” he added.
Other than the must-have authentic German food and beverages, entertainment and decorations, this year, MGM incorporates hints of Macanese elements.
“It’s the excitement and camaraderie. Our team is always excited to do it a little different, a little bit extra. The band is bringing in some local content and one of the special treats is that we have a German [guest] that sings in Mandarin,” Bowie added.
To celebrate the 20th anniversary of the Macau SAR, all Macau ID holders will be eligible to enjoy a MOP20 discount on each entry ticket and a 20% discount on Oktoberfest merchandise.
Additionally, MGM is again bringing back the Family Day Oktoberfest on the afternoon of October 27, welcoming all guests to a Bavarian entertainment brunch with special offers.
The event was officially opened by a beer keg tapping ceremony overseen by Alexis Tam, Secretary for Social Affairs and Culture, and other government officials including Wang Xindong, secretary general of Liaison Office of the Central People’s Government in Macau, and Dieter Lamlé, Consul General of the Federal Republic of Germany in Hong Kong.
This year’s event continues to partner with the Consulate General of the Federal Republic of Germany in Hong Kong and the German Macau Business Association, and is supported by the Macao Government Tourism Office.
Macau Oktoberfest will be held until October 28, excluding October 20, at MGM Cotai’s Roof Terrace. LV