‘On Site’ returns to Fringe as festival-in-festival 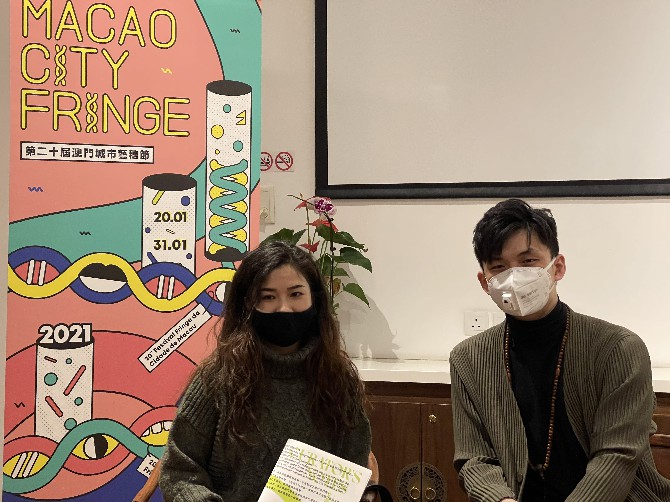 This year, the On Site project is set to reemerge in the Macao City Fringe as the indie art festival’s ‘Crème de la Fringe’. The project sees its third year at the same festival.
Host of the local Fringe Festival, the Cultural Affairs Bureau (IC), organized a press meeting yesterday, in which they introduced two brains behind this year’s On Site project, Tracy Wong and Mao Wei.
Highlighting contemporary artforms, both Wong and Mao stressed that the type of art is still unfamiliar to people in Macau, despite the fact that show tickets sold out in nearly no time.
Mao recalled that when he was studying overseas, contemporary artforms, specifically contemporary dances, bloomed and blossomed for many years. The foundation of audience was large and reliable.
In contrast, the artform is only starting in Macau, with more art companies staging such art types. “Even on the mainland the artform is still developing,” the artist added.
In Macau, most things start with the government’s support, and when they don’t, people will call for the government’s support. This happened to the On Site project, which Wong admitted yesterday.
“Our work first kicked off with the support of the government, that’s correct,” Wong recalled, before justifying that the project is gradually finding its feet.
In addition, the project is also gaining external recognition, as it regularly invites artists from other places to collaborate or even stage their own creations in Macau. However, this year, with border and travel restrictions, the in-person staging will not be happening. However, the collaboration will not subside.
“This year, we have invited several dancers from other cities to videotape their performances, which we will play 30 minutes before our ‘Body Traveler’ show,” Wong informed.
Body Traveler consists of four separate contemporary dance sessions at four different locations. The curators hope that the performances will allow members of the audience to discover contemporary art around them while traveling around Macau.
Apart from the Body Traveler sessions, there will also be a flash mob-style performance at the Largo de São Domingos. Dancers from Macau and other regions, as well as dancers from the On Site – Outreach Incubation Program will join with local musician Bruce Pun to present an improvised music and dance performance.
A workshop for non-dancers to experience contemporary dances will be held from January 19 to 21. Details of other sessions are available on the festival’s website.