One Country, Two Systems | Scholars call to ensure only patriots govern the SARs 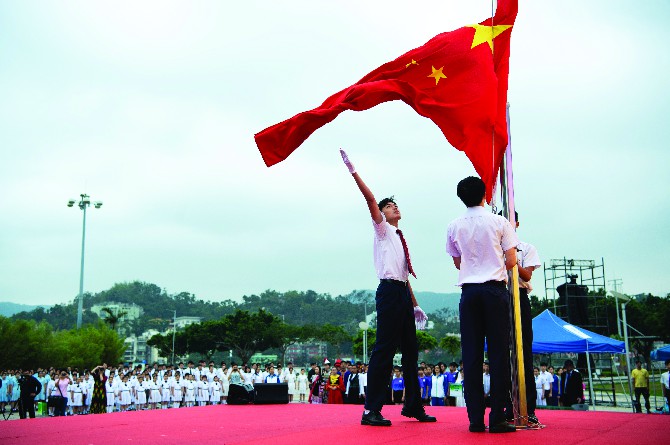 Speakers at a recent seminar about One Country, Two Systems have proposed that Macau evaluate whether changes to the city’s election rules to ensure that Macau is governed by patriots are required.
One of the ideas the seminar calls for an assurance that only those who are patriotic should govern Macau – implying that candidates for the upcoming Legislative Assembly elections should be patriotic.
The seminar also set two branch venues, one in Hong Kong and the other in Macau.
At the Macau branch venue, Wai Kin Lok, director of Center for Constitutional Law and basic Law Studies of the University of Macau (UM) and deputy director of the seminar’s organizer, the Chinese Association of Hong Kong and Macau Studies; and Richard Weixing Hu, dean of the Faculty of Social Sciences of the UM, deemed it necessary that Macau review its election rules to foster patriotism.
“Hong Kong and Macau are different in some specific matters. I think that Macau needs to review our election rules. Only after meticulous research and review can we talk about whether our current election system is sufficient at ensuring that patriots govern Macau,” said Wai, according to a report by TDM.
Richard Weixing Hu shares Wai’s thoughts.
“For example, the design of the electoral system of Hong Kong is not perfect; some of those who do not love Hong Kong and do not love the country are allowed to run for the election [because of the imperfect electoral system in Hong Kong]. Should Macau question that if [other] regulations are needed to vet the background of the candidates and the behaviors of those elected?” Hu questioned.
Two hours before the two expressed their opinions, director of the Hong Kong and Macau Affairs Office of the State Council of China, Xia Baolong, made a clear statement that the electoral system of Hong Kong should be reformed so that those who are against the country can be prevented from taking public positions at the government.
The seminar took place in Beijing with the participation of approximately 200 scholars and politicians from both mainland China, Hong Kong and Macau, including André Cheong, Macau’s Secretary for Administration and Justice.

Lam backs HK electoral changes
Chief Executive Carrie Lam gave her clear support yesterday for electoral reforms that would likely further exclude opposition voices and cement Beijing’s control over the semi-autonomous Chinese city’s politics.
Her comments came a day after the head of Hong Kong and Macau Affairs Office (HKMAO) signaled major changes would be coming to ensure Hong Kong is run by “patriots,” a sign that China no longer intends to tolerate dissenting voices, 23 years after the former British colony was handed over to Chinese rule with a promise that it could maintain its own rights and freedoms for 50 years.
“I can understand that the central authorities are very concerned – they do not want the situation to deteriorate further in such a way that ‘one country, two systems’ cannot be implemented,” Lam said at a regular news briefing.
The Hong Kong government yesterday also said it plans to require district councilors — many of whom are directly elected by their constituents and who tend to be more politically independent — to pledge allegiance to Hong Kong as a special region of China. Currently, only the chief executive, high officials, executive council members, lawmakers and judges are required to take an oath of office.
The electoral changes are expected to be discussed and possibly passed at next month’s meeting of the National People’s Congress, China’s rubber-stamp legislature, and its advisory body, the Chinese People’s Political Consultative Conference.
They will likely take the form of a redistribution of votes in the 1,200-member electoral commission that selects Hong Kong’s chief executive, subject to Beijing’s veto. The commission is composed of voting blocs intended to represent Hong Kong’s various economic, educational and social sectors, along with its largely Beijing-dominated political institutions. The one exception is the 117 commission members drawn from the city’s 458 local district councilors.

Trojan horses
A strongly-worded China Daily editorial echoed Xiao Baolong’s rhetoric, stating, that “the separatists and anti-China subversives in the Hong Kong Special Administrative Region who have been trying to wage a Trojan war against the regional and central governments are now on tenterhooks.”
“Enough is enough,” the state-controlled newspaper said in the article.
“The political wrangling that has split Hong Kong society and hindered its socioeconomic development in recent years, the social unrest and violent rampages that upended Hong Kong society in 2019, the ruthless and endless filibustering that have impeded the legislature’s work and the seizure of local district councils in November 2019 by members of the opposition camp who openly advocated separatism have forced the SAR and central governments’ hands.
“Action is to be taken without further delay to plug the loopholes that have allowed subversives to sneak into Hong Kong’s governance establishment. It is a long overdue day of reckoning. After all, no functioning state tolerates Trojan horses for long,” the editorial stated. Staff reporter