Overview | Probably the best GT Cup Macau has ever seen 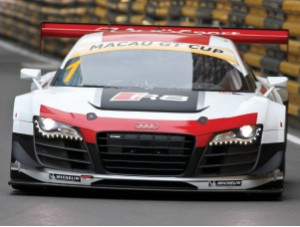 One of the most recent competitions in Macau’s Grand Prix program – on its seventh edition – the Macau GT Cup has fast become one of the most popular races among fans, and the 2014 line-up promises not to dis-
appoint.
At the top will be Italy’s Edoardo Mortara, dubbed “Mr Macau”, who will be chasing his fourth GT Race victory and his sixth overall triumph on the Guia Circuit. However, the quality of the line-up may jeopardize the Audi driver’s position.  This time, he will have to face one of his toughest opponents., including his teammate, the 23-year-
old Belgian Laurens Vanthoor, who placed runner-up in the F3 Macau Grand Prix in 2010 and recently sealed the Blanc-
pain Endurance Series title. Other strong contenders for this year’s title are the newly-crowned DTM Champion, Marco Wittmann, who placed third in the 2011 Formula 3 Grand Prix; and of course, his AAI teammate and fellow DTM driver, Augusto Farfus. Farfus is no stranger to Macau, having attained two FIA WTCC race victories in the Guia Circuit back in 2005 and 2009.
Wittmann and Farfus will drive the two BMW Z4 GT3s from Team AAI, which will also feature Japan’s Takeshi Tsuchiya and former Macau F3 driver Carlo van Dam, who will both race in Mercedes-Benz SLS AMG GT3s.
On the Macau GT Cup podium since the race began, but with no outright victory so far, has been another favourite to claim the top position – Briton Danny Watts.  He is determined to finally reach the  winning spot with his McLaren MP4. Watts will be joined by another talented driver, Richard Meins.
While the list is already long, it is important to note the two-car entry by Mercedes-AMG Driving Academy, driven by the German 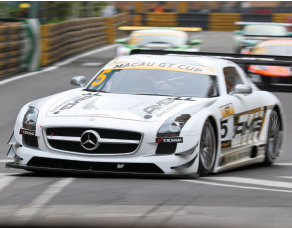 Maro Engel and the Dutchman Renger van der Zande, who seized the top position from Mortara last year, with Mortara  defeated by a puncture.
Macau will be also well represented on the grid with André Couto, who will be competing in a Ferrari 458 Italia GT3, Rodolfo Avila in an ART Motorsports Porsche 997, and Vong Keng Fai in a Porsche 997.
Another of the vehicles that will add to the allure of the event is the Nissan GT-R Nismo GT3 entered by B-Max Racing Team.  It will be driven by Blancpain Endurance Series driver Katsumasa Chiyo.
In addition to this, Craft-Bamboo AMR is entering two Aston Martin Vantage GT3s, which will be  driven by the former FIA WTCC driver Darryl O’Young and Frank Yu Siu-Fung of Hong Kong. From the ranks of the Porsche Carrera Cup Asia comes Earl Bamber, reigning champion and Porsche Mobil1 Supercup leader, who returns in an LKM Racing Porsche 911 GT3 R, joining the Swiss driver and F3 Macau Grand Prix alumni Alexandre Imperatori, who took the third position in the race last year.
Finally, it is impossible not to mention the exciting debut of the Bentley Continental GT3 to be driven by Jean-Karl Vernay.
Is there anything more we can ask from this year’s GT Cup? Renato Marques