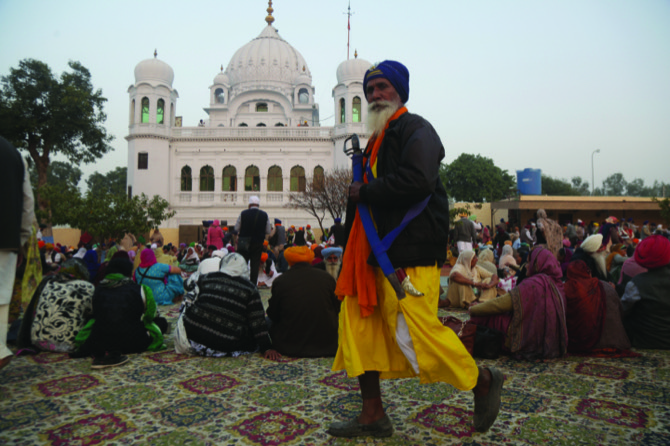 Pakistan’s Prime Minister Imran Khan yesterday attended a groundbreaking ceremony for the first visa-free border crossing with India, a corridor that will allow Sikh pilgrims to easily visit their shrines on each side of the border.

The crossing — known as the Kartarpur corridor — is a rare sign of cooperation between the rival nuclear-armed countries.

Khan used the occasion to again call on India to work together to overcome the bitterness of the past and resolve issues through dialogue to eliminate poverty in both nations. The crossing was a Khan initiative and India last week gave the green light for construction to begin.

Instead of visas, the pilgrims will be given special permits to access their shrines — the Dera Baba Nanak in India’s Punjab province and the Gurdwara Darbar Sahib in Pakistan’s Narowal border district in its own Punjab province.

Yesterday’s ceremony was attended by hundreds of Sikh pilgrims as well as two lawmakers from India and officials from both countries.

Pakistani army chief Gen. Qamar Javed Bajwa called the laying of the foundation for the crossing a “step toward peace, which our region needs.”

Citing examples of Germany and France after World War II, Khan said that if two European neighbors can live peacefully, why not India and Pakistan, which have fought two out of three wars between them over the contested region of Kashmir.

“Both Pakistan and India are nuclear powers, so war is no option as that will be a suicide. Then what else is the option except dialogue to resolve all issues,” said Khan, who was a world-famous cricket player before he turned to politics. “If there is a will on both sides, the issue of Kashmir could also be resolved.”

India’s own cricketer-turned-politician Navjot Singh Sidhu said at the ceremony that he is grateful to Khan and the government in New Delhi for taking “this positive step” that will help Sikhs on both sides of the border reach their shrines.

“We are laying the foundation of the Kartarpur corridor” with this same message, he said.

Qureshi said the Kartarpur corridor will open next November, on the 550th anniversary of  Guru Nanak’s birth and will include a stretch of road 4 kilometers long, a bridge on a river and a border complex with all facilities necessary for pilgrims. AP