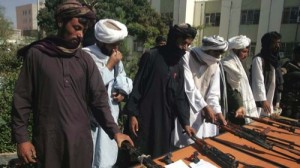 Taliban fighters turning over their weapons

The Pakistani Taliban offered to help Islamic State and other militant fighters in Syria and Iraq and called on them to stay united as they besiege the northern Kurdish stronghold Kobani.
“We are with you in this hard time and will help you as much as possible,” Tehrik-e-Taliban Pakistan chief Mullah Fazlullah said in a statement from an undisclosed location. “We advise you to be patient and determined at such a hard time and stay united, as your enemies stand united against you.”
Another militant group leader who recently split from the Pakistani Taliban, Omar Khorasani, also offered his help in a 10-minute video message to mediate between Islamic State, al-Qaeda and the Nusra Front.
The pledges follow Islamic State’s taking control of large parts of Iraq and Syria, including near the latter’s northern border with Turkey. Sowing terror across the region, with reports of mass killings, crucifixions and trafficking women and girls as sex slaves, the group’s actions have triggered the formation of a U.S.-led international coalition to support Kurdish and Iraqi forces.
“Pakistani militants see the land captured by Islamic State in Iraq and Syria as a base for this holy war, and this being the time to join them,” Asad Munir, a former brigadier general who served as security chief of Pakistan’s tribal area, a Taliban haven, said by phone from Islamabad. “They believe in capturing the world and setting up a caliphate.”
Pakistan’s army started a ground operation this year in the Taliban stronghold of North Waziristan to end violence that has killed more than 50,000 people since 2001. Faseeh Mangi and Kamran Haider, Bloomberg