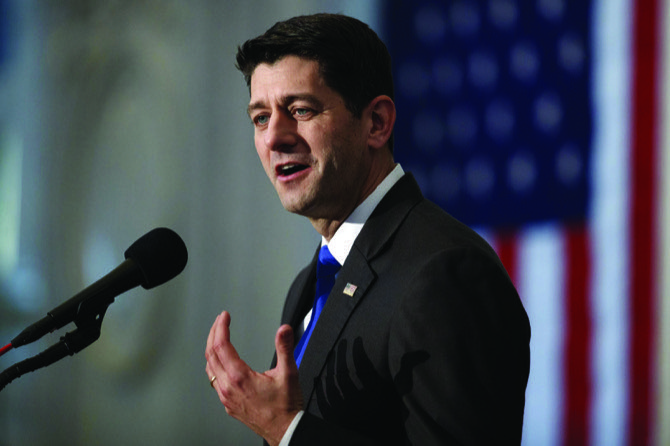 The former speaker of the U.S. House of Representatives, Paul Ryan, said yesterday that the U.S. wants the rest of the world to be more like Taiwan — praise that will likely anger Beijing, which has long been sensitive to cooperation between the U.S. and the democratically governed island that China claims as its own.

“Taiwan is a democratic success story, a reliable partner and a force for good in the world,” Ryan said at a celebration for the 40th anniversary of the Taiwan Relations Act, which guides U.S. policy toward Taiwan.

While the U.S. does not have formal diplomatic ties with the island, the act requires Washington to ensure that Taiwan can defend itself.

“We want the rest of the world to be more like Taiwan,” said Ryan, who led an American delegation to the American Institute in Taiwan, the de facto U.S. embassy. He said both parties care deeply about the “critically important relationship” between the U.S. and Taiwan.

Taiwanese President Tsai Ing-wen, who also spoke at the event, praised the two parties’ “enduring partnership” as one that has “withstood the test of time.”

Taiwan split from mainland China during a civil war in 1949, and only 17 mainly small, developing nations recognize Taiwan as a sovereign nation. Over the past year, Beijing has employed increasingly strident rhetoric around “re-unifying” the island with Communist Party-ruled mainland China, declaring that it has not ruled out the use of force.

Last month, Taiwan asked to purchase new fighter jets and tanks from the U.S., its main supplier of military weapons. American arms sales to Taiwan have long been a thorn in U.S. relations with China. AP