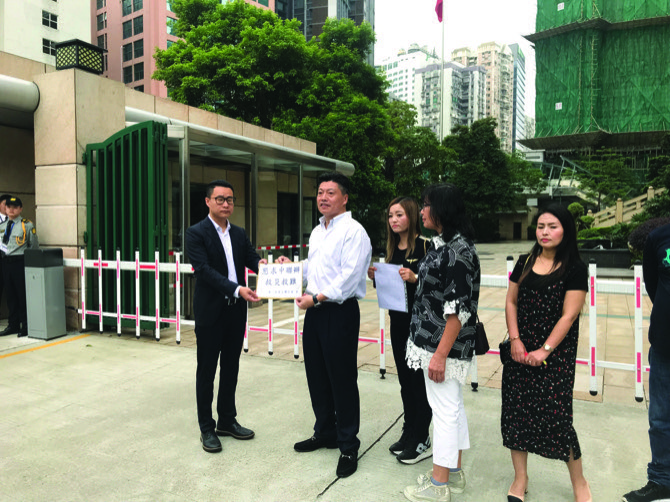 Yesterday, a group of five buyers of the former Pearl Horizon project delivered a petition to the Liaison Office in Macau asking its director to help them recover their never-completed properties.

Led by the leader of the Pearl Horizon Condominium Owners United Association, Kou Meng Pok, the group wants the Central Government to help them.

“The occurrence of the Pearl Horizon cases has harmed the legal and reasonable rights and interests of more than 3,000 buyers. It indeed represents a miscarriage of justice,” argued the group in the petition submitted to the director of the Liaison Office.

“The Pearl Horizon Condominium Owners United Association submitted letters to the Liaison Office’s directors begging for a meeting where we could express our grievance,” the letter reads. “However, we feel deeply helpless that we did not receive the Liaison Office’s help.”

“The purpose of this petition is also to beg to the Liaison Office to help […], and to protect the Basic Law and protect private property. We hope that the Liaison Office can urge the Macau government to solve the Pearl Horizon case, as well as urge [them] to completely solve the case within this [administration],” the letter reads.

According to Kou, in the past, the group submitted their requests to the three previous directors of the Liaison Office.

In recent years, the group has been organizing multiple demonstrations requesting the government to recover their commercial properties. However, the former Pearl Horizon land is being recovered by the government for the purpose of building public housing that may not reflect the initial Pearl Horizon project.

“It is really difficult to talk to a dishonest and irresponsible government,” Kou told the media.

“This year marks two anniversaries [the PRC anniversary and the Macau handover anniversary], and Macau is a harmonious place,” said Kou. “We hope that this year we will not need to organize too many demonstrations, and that we can all celebrate the two anniversaries together, even celebrating the fifth election of the Chief Executive.”

On May 1, Labor Day, Kou’s association will organize a demonstration.

“Our slogan is really strong. It calls the main principal officials to step down from their positions. It will definitely influence Macau’s image,” said Kou, adding that “we don’t want that, but we have no other way, we are forced. We can’t tolerate it anymore. We want to solve the problem peacefully.”

The Administrative Court ruled earlier this month that there was no legal grounds for the Pearl Horizon unit buyers to sue the government for the property price and stamp duty paid on apartments from the controversial and never- completed project.