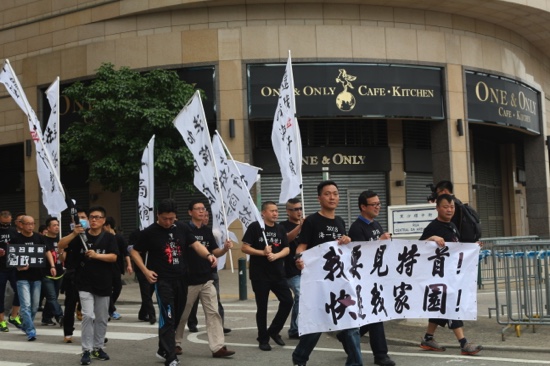 A large crowd of buyers involved in the “Pearl Horizon” group returned to activity yesterday. This time, as the protesters went back to Polytec Assets’ Headquarters the traffic nearby was forced into a slow march.
Hundreds of pre-sales buyers of Pearl Horizon units, staged a protest, urging the government to protect their interests. “I want to meet Chief Executive, Give back my home quick!” –
the main sign reads. Other signs say: “2018, I want my flat ready.”
The crowd of protesters walked all the way through from Polytec Assets’ office to the government headquarters, where a large number of policemen awaited them. “The goal of this dispute is to safeguard both the life of Macau and the city’s universal values,” said Kou Meng Pok, president of Pearl Horizon Proprietors Association. The man claimed to be the first activist. The Public Security Police said that around 680 people participated the demonstration. One hundred and twenty PSP officers were deployed to follow the protest.
When crossing through Avenida 1o De Maio, the long line of people caused drivers who were waiting at the crossroad to sound their car horns to express their frustration at being stuck in traffic.
Representing the views of his fellow protestors, Kou expressed that the “situation is now heading into a deeper level of desperation.” Kou further criticized the government for taking no action since the previous protests. Kou urged the Chief Executive to solve the problems: “we hope that the Chief Executive, as a leader, can be brave to face the reality.” He also advised the crowd of protestors to always engage in peaceful public displays of discontent when it is necessary to do so.
According to Kou, buyers have been acting in a more decisive manner now because they have been assembling every Sunday. They will continue to do so near the border gate and at another location.
The local government was not willing to communicate with the protesters, according to Kou. He acknowledged that this fact alone had prompted people to organize frequent protests.
When referring to the loan payments between buyers and banks, Kou said that the situation had been previously brought to the attention of the banks.
The group arrived at the government headquarters around 5 p.m., then left funeral music playing to show their disapproval of this government and Or Wai Sheun, president of Polytex Asset Holdings Ltd. During the demonstration, a large number of police officers were deployed to the scene. Staff reporter