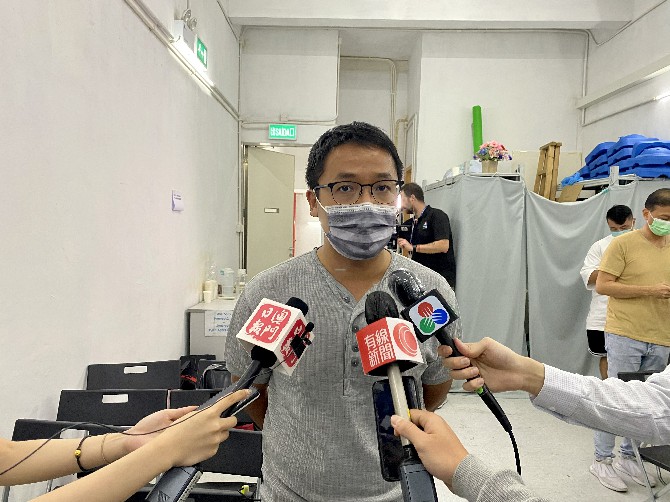 Lawmakers José Pereira Coutinho and Ron Lam called for improvements yesterday in the Legislative Assembly (AL) in relation to the meetings of the several AL committees.
In the first official plenary session of the seventh AL, the two lawmakers took the opportunity presented by agenda items related to the establishment of new AL committees to raise concerns about the functioning of these committees.
Lam reiterated a regulation which states that all lawmakers, even those who are not a member of a specific committee, can participate in committee meetings.
“I have been paying attention to this matter and I have seen that in the past the AL has had several committee meetings running concurrently. This clearly […] prevents lawmakers [having the chance] to join the meetings and keep up-to-date with the matters being discussed,” Lam said. He called for better scheduling so that lawmakers can participate in the meetings as well as receive all relevant documents for discussion.
Speaking on the matter, AL president Kou Hoi In explained that proposals distributed to lawmakers and being voted on are developed by the AL Executive Board and take into account lawmakers’ backgrounds and specialties as well as the different election methods.
Regarding access to documents, Kou left it up to each committee’s chairperson to decide whether or not it is possible to distribute all the documentation.
“I think it might be possible to [distribute documentation] but the final decision will be from the chairperson of each committee,” Kou said, adding that in most cases this requires a lot of paper and noting that the chair might refuse to do so under the justification of “saving resources.”
Responding to the issue raised about the scheduling of meetings, the AL president remarked that this is being tentatively addressed but noted that there are many factors to be taken into account, such as the availability of members of the government.
In the same session, Pereira Coutinho reiterated his call for committee meetings to be open to the public or at least the media, noting that not all topics require secrecy and that meetings should only be held in camera in very specific cases.
As with the document issue, Kou replied that the matter is an “internal decision” of the committees and should be debated within each committee, reaffirming that the rules allow it as long as committee members reach consensus.
After the approval of all proposals from the Executive Board concerning the establishment of the Standing, Follow-up, and House of Rules committees, lawmakers were called to vote for a representative to be part of the AL’s Administrative Council.
Lawmaker Angela Leong was elected for this post with a total of 30 votes. Chui Sai Peng received two votes and one ballot was considered void as a lawmaker had voted for two different people.

At the start of his first term in the Legislative Assembly, lawmaker Ron Lam has called on the government to adopt the same system being used in the neighboring region of Hong Kong to allow the entry of non-resident workers, specifically those engaging in domestic work.
Lam explained that the current policy in Macau, which does not allow these workers to enter, is causing severe difficulties for families.
In the lawmaker’s opinion, local authorities should replicate the policy of Hong Kong and allow non-resident workers to enter the city as long they undergo quarantine in isolation.
He added that the easing of border restrictions would also potentially allow the resumption of flights to several Southeast Asian countries, including the Philippines and Indonesia, helping to repatriate workers from those countries who remain stranded in Macau.