Person of the Year | Andrew W. Scott The taxi player 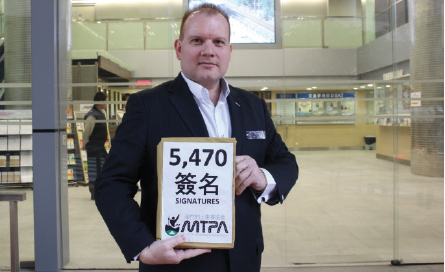 On Dec 2, MTPA president submitted a petition containing 5,470 signatures to the Transport Bureau, urging the gov’t to improve taxi services in the city

Maybe when our membership gets up to 1,000 people or something, we can go to the responsible department in the government,” a bluffing Mr Scott told Macau Daily Times back in July about a month after the Facebook page “Macau Taxi Driver Shame” was launched, on June 30, with him as the mentor behind it.
The page now boasts over 4,500 likes and thousands of posts that pop up constantly, mostly with pictures and tales of taxi hatred stories from members (fans).
In the meantime, Andrew W. Scott and his volunteer team created an association (Macau Taxi Passengers Association), sit down with the “responsible” government departments, casino operators and have been since day one a regular presence in the media. It was quite an achievement in a community often divided across “self-made-ghettos” and usually hard to mobilize.
However, the deterioration of the transportation system and of the traffic situation in general, especially over the past three years, created the right (wrong) conditions for a swift response by the community to this civic initiative. Moreover, having been a professional poker player, Mr Scott knew he had a strong hand to play the blame ‘game’ and perfect timing: while taxi drivers were becoming contemptible, greedier and more arrogant by the day, at the same pace the public was getting fed up and aggrieved by the lousy and shameful service of the many scammers in the cab industry.
“Fishing” soon became a common word in Macau’s lexicon, referring to taxi drivers touting for and negotiating business through open windows for off-meter fares.
Andrew W. Scott uses his free time left from a busy line of work as a gaming consultant to write press releases, arrange meetings, manage the Facebook page and perform his duties as President of the association. He’s certainly not alone anymore: the page has members from 45 different nationalities, basically making the plenum of Macau’s international communities, who joined forces for a common cause, to tackle a problem that affects everyone, citizens and tourists alike.
That is why Mr Scott deems his mission “crucial” to a city that aims to be a reputable international tourist destination: “If the taxi drivers are going to lie and cheat and swindle customers, it is going to give Macau a very bad name.”
But things got way beyond matters of “image,” and again the 45 year-old Australian executive, who relocated to Macau in 2009, was the first to raise the alert concerning the aggressive behavior of many black taxi drivers, reporting cases of verbal and physical aggression, which could escalate to tragic outcomes. On December 10, a resident was victim to a hit and run incident by a Macau taxi driver, enduring nasty injuries.
If a person stands out in this year of 2014, for his courage and dedication, that person is indeed Andrew W. Scott. The poker pro played his cards right to become a player in the public transport industry.