PHILIPPINES | 110 rescued from ferry: ‘Death was in our minds’ 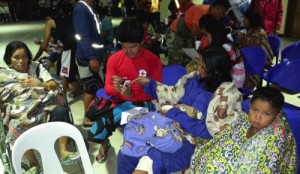 In this photo released by the Philippine National Red Cross Surigao Del Norte Chapter, survivors from the M/V Maharlika II ferry that keep themselves warm with blankets as they arrive at the Lipata Port Terminal in Surigao city, central Philippines

Survivors from a ferry that sank after encountering steering problems in the central Philippines said yesterday that they were tossed about by the churning sea in darkness for six hours while praying and clinging to an overturned life raft before a passing ship rescued them.
“A few more hours in those huge, huge waves and we could have all died,” said ferry passenger Romeo Cabag, a 32-year-old security guard who survived with his wife, Wilma. “I had cramps in both legs, was exhausted, and at one point I was beginning to pray that if I won’t make it, that God allow at least my wife to live.”
Rescuers, including the crew on two passing foreign vessels, plucked at least 110 survivors, including the Cabag couple, from the dangerously shifting waters. They recovered at least three bodies from the M/V Maharlika II, which listed and sank at nightfall Saturday, Red Cross aid worker Edward Barbero said.
Search and rescue efforts by air and sea continued yesterday because it was uncertain how many passengers and crew members were aboard the Maharlika, coast guard Capt. Joseph Coyme said.
“There are discrepancies in the numbers and we cannot terminate the search and rescue until we’re sure that everybody has been accounted for,” Coyme said by cellphone from the central city of Surigao, where the survivors were taken.
As he spoke, an air force helicopter flew low overhead to start a search. Coast guard personnel could be heard using two-way radio to ask civilian ships leaving Surigao’s port to “help look for survivors, life vests” near the scene of the accident and along the coast.
Ambulance vans stood at the seaport in Surigao and nearby towns to assist any more survivors.
The ferry encountered steering trouble off Southern Leyte province and was then battered by huge waves and fierce winds whipped up by a typhoon north of its path, Coyme said.
With clear weather in the central provinces south of the typhoon, the coast guard cleared the Maharlika to leave Surigao city around noon Saturday for a regular domestic run. The skipper sent the distress call a few hours later and several passengers used their cellphones to call for help when the ferry’s steering mechanism malfunctioned and fierce wind and big waves began to batter the stalled vessel, Coyme and other coast guard officials said.
As the ferry frighteningly listed, Cabag said he, his wife and other passengers were handed life jackets. Amid the frenzy and cries for help, they uttered a prayer and jumped into the rough waters in panic. They struggled to swim into an overturned life raft that was not adequately inflated and held to the ropes on its sides for six hours.
A passing cargo ship with a spotlight saw them in the darkness but sailed away after failing to maneuver close toward Cabag’s group of survivors because of the big waves. When a second ship with a search light passed close by, Cabag and his companions used their remaining strength to raise their life jackets with reflectors.
“The tanker’s moving spotlight hit the reflectors and they noticed us,” Cabag told The Associated Press by cellphone. “Death was in our minds for several hours in the water until a crew member from the second ship used a megaphone with a message that drove some of my fellow survivors to tears: ‘Hold on, hold on, don’t let go, all of you will be saved.’”
An elderly man and a woman in their group, however, perished, their bodies still attached to their life ring and jacket, Cabag said, adding that it underscored the ordeal they went through.
Frequent storms, badly maintained vessels and weak enforcement of safety regulations have been blamed for past accidents at sea in the Philippines, including in 1987 when the ferry Dona Paz sank after colliding with a fuel tanker, killing more than 4,300 people in the world’s worst peacetime maritime disaster. Jim Gomez, Manila, AP