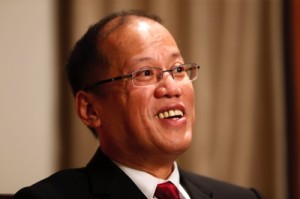 Philippine President Benigno Aquino III said Tuesday his nation will stick up for its territorial rights in the disputed South China Sea and voiced concern that a recent mission by two Chinese survey ships could presage an attempt to drill for oil there.
In an interview with The Associated Press, Aquino said that all nations that ply the South China Sea, a major conduit for world trade, should also be concerned about intimidatory behavior by China, which claims most of resource-rich waters for itself.
The Philippines, a treaty U.S. ally, has riled China by challenging its expansive maritime claims at an international tribunal. The leader of the outgunned Southeast Asian nation hoped that a ruling could clarify the legality of China’s claims and could serve to “level the playing field” and reduce tensions.
Although it’s a signatory the U.N. Convention on the Law of the Sea, like the Philippines, China refuses to answer the case, maintaining the tribunal lacks the adequate jurisdiction. A lawyer representing the Philippines has said a ruling is not expected before early 2016.
Speaking on the sidelines of a gathering of world leaders at the United Nations, Aquino showed images of what he said was land reclamation by China off the Johnson Reef within the Philippines’ 200-mile exclusive economic zone, or EEZ, over the past two years.
In another area, known as Reed Bank, which lies about 80 miles from the southern Philippine island of Palawan, Aquino said China had sent two hydrographic ships in June.
He said the Philippines was uncertain of their purpose, but wondered if China was planning to dispatch an oil rig that was sent earlier this year to waters claimed by Vietnam, causing a spike in tensions. He said perhaps China was just mapping terrain for its submarines.
“What is clear is that there were two ships which were performing certain measurements in this feature which is part of the Philippines EEZ,” said Aquino. The Philippines said last month it was making a diplomatic protest to China.
China’s mission at the U.N. did not immediately respond Tuesday to a request for comment.
China says its South China Sea claims have a historical basis. Along with the Philippines, Vietnam, Brunei, Malaysia and Taiwan, it has been contesting ownership of mostly barren islands, islets, reefs and surrounding waters there for decades. But as its economic and military power has grown, China has acted with growing brio, declaring administrative oversight of disputed areas and control of fisheries.
“It’s a matter of (Philippine) national concern, but it’s not just our concern. We believe that besides the claimant countries it affects everybody who has to traverse the South China Sea,” Aquino said. Matthew Pennington, New York, AP