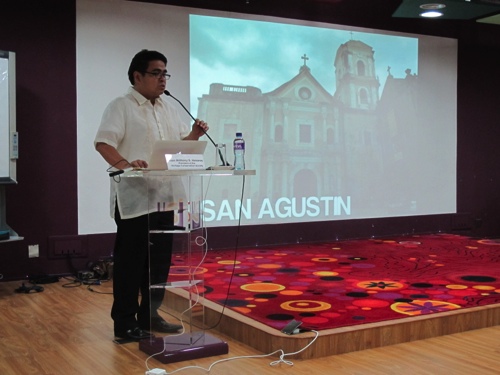 The Philippines is hit by about 20 storms each year, and other severe natural disasters often affect this country, which is home to about 100 million people. Its cultural heritage has been severely affected by typhoons and earthquakes, and raising awareness toward its preservation among the Filipino community and the government remains crucial, according to Mr Ivan Anthony S. Henares, president of the Heritage Conservation Society of the Philippines.
Devoting his life to advocating for cultural heritage conservation, Ivan Henares gave a lecture this week at the University of Saint Joseph, speaking of challenges faced in preserving or re-constructing old buildings.
Shaped not only by colonial influences, but also by a profound religious tradition, the Philippines’ cultural heritage remains at the mercy of natural disasters. However, other challenges have sometimes prevented the preservation of certain cultural sites, buildings or monuments.
The lack of government funding, or the fact that parts of society remain skeptical about using public money to rebuild churches, has sometimes hampered heritage presentation.
“We continue to face challenges in the Philippines today. Heritage conservation does not get the same amount of attention as education, health or the environment (…) but actually heritage conservation brings a lot of benefits to cultural tourism. It’s an investment, and we need to convey this idea,” said Ivan Henares.
Henares does not believe that government action has directly contributed to the destruction of local heritage; however, there are people within the government that do not understand heritage preservation, he stated.
Ivan Henares cited how, for instance, a church is more than a religious site. It is also a cultural treasure deserving of preservation, particularly since it appeals to visitors trekking the cultural tourism path.
“There’s support from the government, but we need more. Even among Filipinos, there are [people] who criticize funding of reconstruction or preservation of churches. They don’t understand that tourism also relies on churches; we are investing money in order to build a cultural tourism industry,” he stressed.
Another challenge that the Philippines faces is the construction of skyscrapers, which often block views of old monuments. He stated that there are already “big movements” of citizens trying to prevent that from happening, which shows that a part of the Filipino society is advocating for cultural heritage protection. “Hopefully, we will be able to raise the level of discussion,” he added.
Ivan Henares also defended the re-use of old buildings, reasoning that it is a suitable solution for preserving heritage and thus avoiding demolishing culturally interesting structures.
“We are trying to raise awareness of old buildings that can house new facilities. We can modify structures, but must respect old features, or preserve the façade,” he said, adding that Macau is a good example in this sense.
Promoting the Philippines’ cultural heritage abroad was also highlighted as being a decisive measure – particularly because there are a lot of Filipinos working overseas.
“Few people actually know about the Philippines’ cultural heritage,” he said, providing the audience with a glimpse of the Philippines’ heritage sites from old churches and rice terraces to old traditional town houses.
Ivan Henares has been advocating for the preservation of the Philippines’ heritage since he was a college student. In addition to his work as president of the Heritage Conservation Society of the Philippines, a non-government organization, he is a senior lecturer at the University of the Philippines.
Henares traveled to Macau to give a lecture on “Preserving the Philippines’ Cultural Heritage: Milestones and Challenges,” which was organized by the Consulate General of the Philippines in Macau in cooperation with the University of Saint Joseph.

Maria Antónia Espadinha, who taught at the University of Macau’s Portuguese Department (which she also coordinated for a short period), has been appointed vice-rector of the University of Saint Joseph (USJ), Radio Macau reported.
USJ’s rector, Father Peter Stilwell, stated that the university is hoping to reinforce its curricula in Portuguese. He added that Maria Antónia Espadinha has broad experience in tertiary education, while also having  very comprehensive knowledge of the Portuguese language and Portuguese culture in Macau. “We are hoping she can help us develop our Lusophone [curricula],” he said.
English remains, however, USJ’s main teaching language, with the goal of developing the institution into a more international university.
Father Peter Stilwell recognized that the Portuguese language has potential that hasn’t been further explored within the university.
Maria Antónia Espadinha told Radio Macau that she accepted USJ’s invitation to become vice-rector as “it is an interesting challenge.” She added that there is a need to join forces in Macau to further promote the Portuguese language.
Separately, the vice-rector of the Portuguese Catholic University, José Tolentino Mendonça, will be travelling to Macau next week to give a lecture co-organized by USJ on September 25 at 6:30 p.m. He will be discussing the “contribution of culture to development” at the Rui Cunha Foundation.