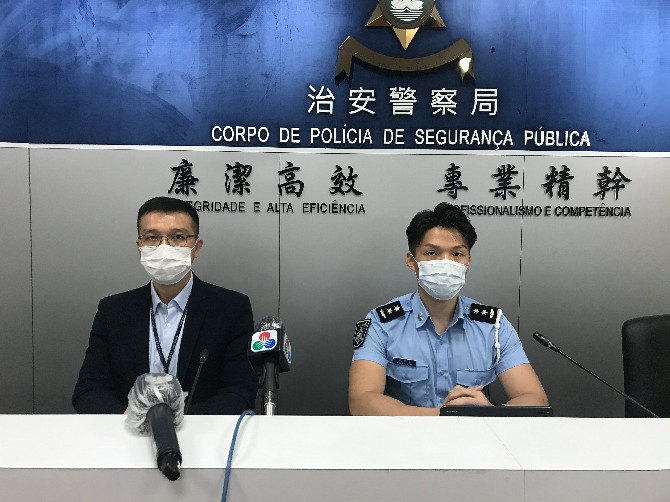 The Judiciary Police (PJ) has forwarded one man to the prosecution authority under the charge of embezzlement, officials revealed during yesterday’s joint police press conference.
The suspect, surnamed Chan, is a 44-year-old mainland resident who was working for a restaurant located in Iao Han area. The restaurant specializes in take-away food services. One of two owners of the restaurant is a mainland man who is studying in Macau while simultaneously running the business. The mainland owner had been in contact with Chan for withholding money generated by the business.
The business has three employees: one cook, the accused who worked as a kitchen assistant, and another employee.
Chan started working for the restaurant in 2017. According to PJ, he was promoted the next year to a kitchen assistant and cashier position.
Since January this year, the restaurant’s owner has remained in mainland China and was unable to return to Macau until the end of May. During his absence, Chan was responsible for transferring the restaurant’s revenue to him via bank transfer. Chan was also expected to keep in contact with his employer.
However, the owner had not received any bank transfers by the end of March. The other owner of the restaurant then visited the shop to examine the accounts and confirmed that no revenue had been generated by the restaurant.
At the end of May, the mainland owner returned to Macau and questioned Chan, who admitted to being in possession of the money.
The owner then reported the case to the police authority. Upon police questioning, Chan refused to cooperate.
The PJ transmitted Chan to the prosecution authority under the charge of credit abuse involving a large sum of money.
Last week, PJ also charged one local resident with breach of trust. The local man, surnamed Lau, 38, was entrusted by his client to collect rent. Since July of 2019, Lau had been collecting a monthly rent of 24,000 Hong Kong dollars for his client. However, in January of this year, Lau stopped transferring the rent to the landlord and left the real estate company he was working for. Later, Lau confessed to the police authority that he had used all the money.
In addition to the embezzlement case, PJ received two reports regarding online fraud. In both cases, the victim is a Macau local woman in her 40s. In one case, she claimed to have lost 15,000 yuan to an online shopping scam. In the second case, the woman reported a loss of 20,000 Hong Kong dollars to a fake express company, believing that her online suitor (who claimed to be an Korean American) had sent her expensive gifts through the express company.

PSP registers
two drunk drivers
during road inspection
The Public Security Police Force (PSP) has registered two local residents driving under the influence of alcohol, PSP said during the joint police press conference.
The first suspect is a salesman, Lei, 33. During PSP’s routine road inspection, Lei was intercepted on May 30 while driving his lightweight car. He was tested with 1.24 grams of alcohol per liter of blood. Lei admitted he had consumed alcohol prior to the police interception.
The second suspect is a clerk, surnamed Wong, 25. Wong was on his motorbike yesterday when he was ordered to stop for a blood alcohol test. The test showed that Wong had a 1.66 grams of alcohol per liter of blood. However, Wong appealed to the police authority for another test, which was conducted later in the hospital. The hospital test result showed an even higher value, at 1.77 grams.
Both Lei and Wong were forwarded to the prosecution authority. No ruling had been announced by the time of the press conference.