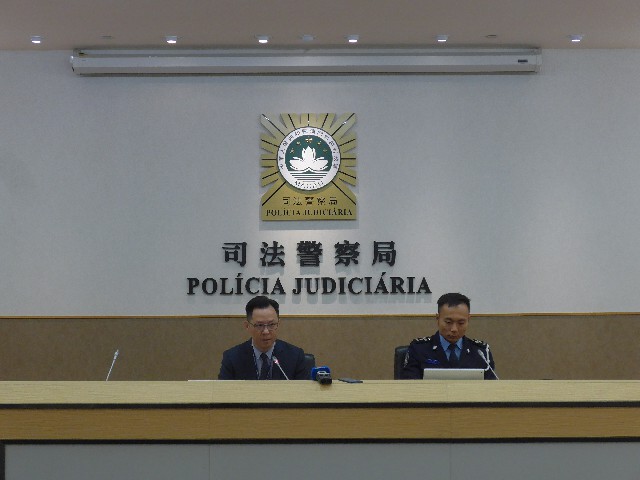 Yesterday, the Judiciary Police (PJ) applauded the cross- border communication mechanism following the closing of two cases thanks to the help of law enforcement bodies on the mainland.
One of the cases involves a corpse. At 5:45 p.m. on December 1, the PJ received a report that a human body was spotted in the sea off the coast from the Ocean Gardens residential complex in Taipa.
An initial post-mortem examination found no suspicious wounds on the body. In the pockets of the body’s clothing was a wallet with the identification document of the deceased that identified him as a 40-year-old male mainland resident surnamed Zhou.
The PJ immediately contacted the mainland police and shared this information. The PJ’s mainland counterpart replied with information about a bust on an illegal border-crossing case that took place at 10:50pm on November 30 off the coast from Hengqin.
During the mainland police’s operation, the boat carrying the suspects capsized, dropping six people into the sea. The mainland police managed to save two, while the other four went missing.
Both law enforcement bodies believe Zhou was among the passengers of the boat that went missing while the mainland police are still investigating the illegal border-crossing case.
There was also a recent robbery which required the activation of the cross-border communication mechanism.
At 3:38 a.m. on October 2, a robbery in the staircase of a condo building in Toi San was reported to the PJ.
The victim is a female tourist from the mainland in her 30s, who is believed to be staying at her relative’s place.
She took the staircase alone on her way back to the condo at about 1:30 a.m. when she was attacked by a man who was following her, sustaining injuries to her head. Her handbag containing HKD70,000 in cash was taken.
She struggled back to her relative’s condo where the police were notified. She was sent to the Conde S. Januário Hospital and was diagnosed with a serious condition.
The PJ examined surveillance camera footage and spotted a suspect who had left Macau through the Cotai border checkpoint. The PJ then notified the Zhuhai Police Force, which successfully caught the suspect at around noon of the same day.
For the time being, the PJ is still investigating the suspect’s motives and the whereabouts of the money.
The PJ expressed its appreciation for the immediate action and assistance from its mainland counterparts. It also stressed the effectiveness of the cross-border communication and assistance mechanism.

SCAM FOR LOVE,
LOVE FOR SCAM
Following last week’s bust of syndicate running online romantic scams, the PJ has unveiled two other similar cases.
In the first case, the local victim, a worker in the beauty industry in her 30s, was with her father when the case was reported to the PJ on December 1.
On October 22, the victim began speaking with a person claiming to be a man over e-messenger. She soon fell in love with him. He subsequently asked her to download a mobile app into which he requested she deposit 1,000 yuan for games, promising that any winnings she made she could later withdraw as cash.
She won several rounds and withdrew the cash, giving her the confidence to take a further 80,000 yuan from her father’s bank account and deposit it into the mobile platform under instructions from her suppose paramour.
After several rounds of games, she won 250,000 yuan worth of virtual money but was not allowed to cash it. The man told her that the withdrawal service had frozen her account and asked her to put in 108,000 yuan in order to reactivate it.
She still could not cash the fund after making the subsequent deposit, so she opted to tell her father everything. Her father, who has lost 188,000 yuan in total, believed she had been scammed and made her report the incident.
In the other case, the female victim got in touch with an individual claiming to be a male British citizen online on October 19. The man claimed to be from London but currently in Saudi Arabia for research purposes.
On October 23, the man told the victim that he would meet her in Macau. However, he said his online banking system would not work. He then asked the victim to try opening the website for him.
The victim was asked to login for the alleged scammer with details he provided. After login, the page showed that he had a fund of more than 4 million British pounds. He asked the victim to lend him MOP25,000 due to his frozen account so he could buy tickets to Macau.
Afterwards, the man claimed that his employer would not allow him to leave the country unless he managed to send certain equipment to China. He said he could not pay the courier with a frozen fund, so asked the victim to lend him another MOP33,000.
The man later told the victim that he needed MOP334,000 for a medical operation which she also supplied, all while he reiterated that he was planning to come to Macau.
Finally, the man claimed he wanted to return the fund, but needed extra funds to reactivate his “frozen” account. She transferred MOP280,000 to the man who later asked her for another MOP491,000 as an “extra late surcharge”. After that, the victim sent MOP25,000 more to the man.
In the end, her parents spotted several large transactions from her bank passbook and uncovered the case. The 29-year-old casino-worker has lost MOP1.19 million in total.