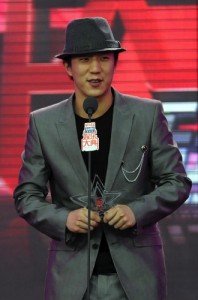 Police in Beijing have formally arrested the son of Hong Kong martial arts film star Jackie Chan on suspicion of allowing other people to consume drugs, a charge that carries a maximum sentence of three years’ imprisonment, prosecutors said yesterday.
The Dongcheng District prosecutor’s office said it had given approval for the formal arrest of actor Jaycee Chan following a request from police a week earlier. It made the announcement on its official Sina Weibo microblog.
Jaycee Chan, 31, became the highest-profile celebrity to be ensnared in an anti-drug crackdown by Chinese authorities when he was detained Aug. 14 along with Taiwanese movie star Ko Kai. Police said a few days later that both actors had tested positive for marijuana and admitted using the drug, and that 100 grams of it were taken from Chan’s home.
In China, police need official approval from prosecutors to formally arrest a suspect. During a period of formal arrest, police can continue to investigate. If they decide to criminally charge him, a trial would follow. The maximum sentence for allowing others to take drugs in locations such as a property, workplace or hotel is three years’ imprisonment.
Ko, 23, was given a sentence of 14 days in administrative detention after he admitted using marijiuana.
On his release, he appeared at a news conference with his parents and agent and apologized for using the drug.
Jackie Chan, who was named an anti-drug ambassador in 2009 by Chinese authorities, has publicly apologized for his son’s drug use and pledged to work with him on his recovery.
A series of celebrities have been detained on drug charges following a declaration in June by President Xi Jinping that illegal drugs should be wiped out and that offenders would be severely punished.
Performing arts associations and theater companies in Beijing have pledged not to hire any actors connected with drugs, and national associations representing film actors, directors and producers have reportedly issued a notice saying members who repeatedly take drugs will be expelled and banned from making movies. AP