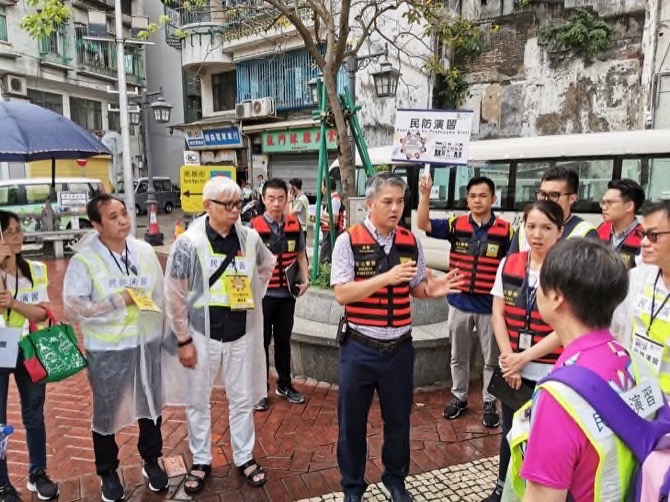 The Judiciary Police (PJ) held another storm surge evacuation drill yesterday, simulating the evacuation of the populace from low-lying areas of the city. It also coordinated similar exercises with the six gaming operators in order to review their disaster management and evacuation procedures.

Yesterday the PJ conducted briefing sessions and a simulation drill to raise public awareness on disaster prevention and storm surge evacuation as the typhoon season approaches.

The PJ noted in a statement that it, together with the Unitary Police Service, aims to facilitate safe and orderly evacuations among the public during typhoons and storm surges.

The “Storm Surge Evacuation Plan in Low-lying Areas during Typhoon” simulation drill was held yesterday from Ponte 16 to R. Francisco Antonio and moved east to NAPE, where the PJ was responsible for the evacuation process.

The drill simulated Macau being hit by a storm surge, and civil protection entities activated the evacuation plan as directed.

The PJ carried out the evacuation in the designated zone and explained the plan to shop owners and residents, including precautionary measures for disasters, and further explained the emergency evacuation gathering points to the public.

Broadcasts will be made via Judiciary Police vehicles to remind residents in the area about the recent drill.

“We believe the drill will not only help enhance the coordination and support between the command center and the evacuation team members, but also give the public a clearer picture of the escape routes, evacuation processes and the necessary precautions in advance,” the bureau said.

The PJ pledged to review the drill via public feedback in order to ensure a smooth and effective evacuation in the future.

Last month, the PJ also partnered with the Social Welfare Bureau to organize workshop and simulation drill to raise public awareness of the plan for the city’s low-lying areas. LV