Police ‘suggesting’ or ‘petitioning’ may be considered a violation 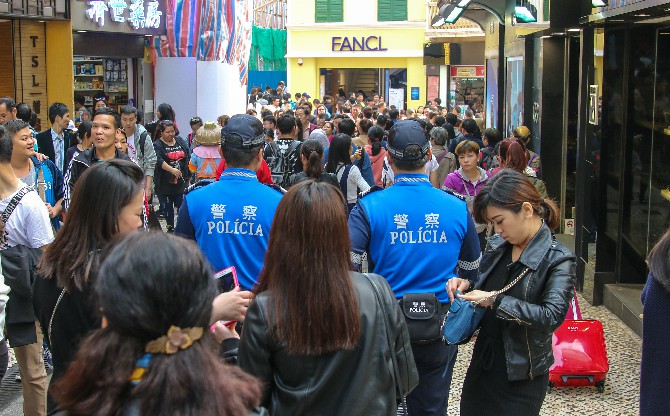 Police officers who make suggestions or petitions to the government authority may be deemed in violation of their special obligations, according to the Third Standing Committee of the Legislative Assembly (AL).
Yesterday morning, the AL Third Standing Committee discussed the amendments to laws concerning security service and security force personnel. Government representatives who attended the meeting answered questions raised by some of the committee members.
Among approximately 40 discussed articles, lawmakers queried the article stating that security service and security force personnel shall not participate in any group demonstration which violates the disciplines, shall not participate in any political clubs or organizations with the nature of a trade union, and shall not participate in any activities organized by the concerned organizations.
Security service and security force personnel are under special obligations in regard to the three situations outlined above.
Chairman of the Third Standing Committee of AL Vong Hin Fai explained that the abovementioned provisions already exist in other laws.
As to how the government will evaluate whether an activity is political or related to trade unions, Vong Hin Fai only said that the government will form an assessment in accordance with Macau’s law.
A member of the committee questioned whether the involved individuals will be considered to be in violation of their “special obligation” when two or more people from the security service and the security force “suggest” or “petition” in some cases.
Citing the reply from government representatives, Vong said that according to law No. 5/94/M, article 2, “petitions, representatives and complaints are said to be collective when presented by a group of people through a single instrument and in a collective name when presented by a legal person representing the respective members.”
Under the aforementioned provision, police officers may be regarded as violating their special obligation when two or more personnel are involved. However, government representatives reiterated that the actual situation needs to be considered while making a relevant judgement.
In addition, the law amendment suggests that security service and security force personnel are obliged to notify the government when their relatives complete a higher education course and when their family members receive a certification for an educational degree, when their relatives’ educational background changes, or the officers have more family members. It is proposed that the concerned personnel notify the government regarding the allowances the family receives.