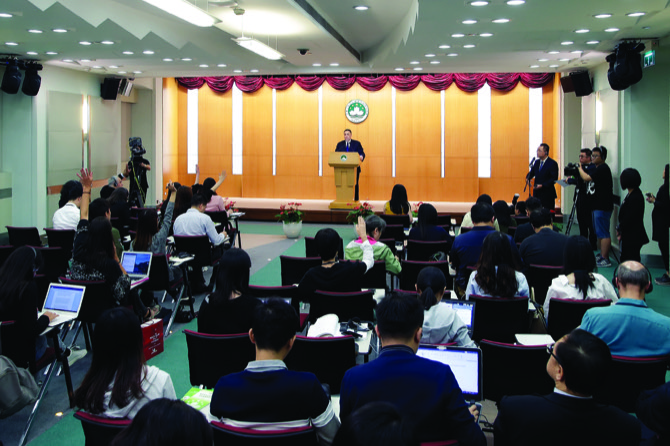 The Chief Executive Chui Sai On met the press at Government Headquarters after delivering the Policy Address for the Fiscal Year 2019 at the Legislative Assembly (AL).

Chui pledged that future gaming concessions will be “absolutely transparent.”

“Two of the gaming concessions will expire in 2020, and four will expire in 2022. We will carry out the tender before 2022. Concerning the two concessions that will expire earlier, we are currently considering how to manage it. We are undertaking the relevant work. We will publicize them [results] in due time. Regarding the legal basis, we will openly and transparently inform the public about it,” said Chui.

“My term lasts until the 19th December of 2019. It [the gaming concession issue] exceeds my term, therefore I cannot answer questions [concerning issues] after my term. I can only do the preparation work,” said Chui.

When questioned about what his government will do regarding gaming concessions, Chui replied by saying that it has already been done in a mid-term review. He also mentioned that the follow-up work on that review is under way and that the number of gambling tables will be under strict restrictions to ensure an orderly development of the industry. Oversight on junkets will be strengthened to raise their sense of responsibility, Chui added.

When asked how the gaming industry can meet Macau’s goal of becoming a world tourism and leisure center, Chui said that his government has balanced the gaming and non-gaming sectors, and that it is also focused on the hospitality industry, and issues concerning competition within the gaming industry.

Besides the city’s gaming industry, Chui made some remarks about the controversial topic of the Land Law.

“The community has several opinions about the Land Law [regarding the 25-year land utilization]. First, we [the government] really want to show fairness. That is why we review each individual case through the Commission Against Corruption to confirm whether the procedure [to annul land concessions] implicates any violation of the administrative regulation,” said Chui, who later added that “the land law has been strictly implemented.”

Currently, there is not any land law amendment procedure being carried out within his government, according to Chui.

In addition, regarding the long-awaited Trade Union Law, Chui revealed that no progress will be made by his government.

“Regarding this matter, the government has been clear: it currently does not have the intention to take the initiative to propose the Trade Union Law,” Chui said.

During Chui’s report to the AL, he mentioned that his government will ensure that the CE election is carried out smoothly.

“This government hopes to try its best to elect the new CE according to the relevant laws next year. To date, nobody has approached me, and I really don’t know who the next CE will be. I believe the CE will be elected according to the law,” said Chui.

When talking to the media on the sidelines of the Policy Address presentation, Sulu Sou stressed that “the Policy Address cannot fulfill his [Chui’s] promise. Back in 2014, when he ran for CE, he promised to push forward the development of Macau’s democracy. Political development was not mentioned at all. This is his last policy address. If, this time, there are no plans for political development, he will not make any contribution to Macau’s politic development within his term.” Regarding other topics, Sou added that, in regard to appealing to the youth, “young people do not need the government to teach them about development. But the government should create a bigger space for their development.”