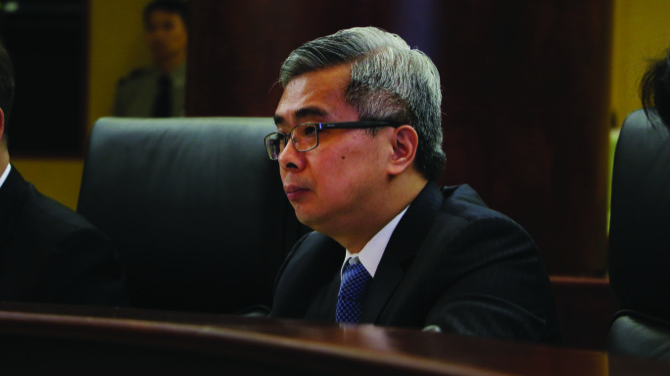 Wong Sio Chak was at the Legislative Assembly (AL) yesterday to present the top priorities for the area of security. Several lawmakers expressed concerns over what they called a constant “extension of powers” granted to police authorities in the investigation and resolution of several kinds of cases.

The first lawmaker to raise issues regarding this issue was Agnes Lam, who questioned the Secretary for Security on the many legal regimes currently being analyzed by the Assembly that aim to empower police authorities, namely in areas such as cyber security, data protection, video surveillance and phone tapping, among others.

Lam also noted that in previous years “there were many cases of police officers, namely from the Public Security Police Force, involved in problems and disciplinary actions,” noting that the Committee for Disciplinary Control of the Security Forces and Services of Macau (CFD) – a body that is in charge of analyzing such processes and cases – was lacking independence since, “it depends directly on the PSP.”

Another of the concerns aired by Lam was on the benefits and privileges of police staff, which according to the lawmaker are not even nor consistent and that “harms the motivation of the staff.”

The same topics were also addressed by lawmakers such as Sulu Sou and Wong Kit Cheng, with Sou highlighting the differences between the privileges enjoyed by different staff members, including holiday allowance and monetary compensation.

Also on the topic of police powers, Ho Ion Sang highlighted the measures related to video surveillance. According to Ho, the government should create a balance between the need of surveillance for security reasons and the privacy of the citizens and people in general.

However, Wong said that lawmakers and the public should not be worried with the extension of such powers because they actually represent a democratization of the system, adding “the government is constantly developing the system. Develop does not mean give more power but, in fact, create added restrictions and an added control over all sectors [of society].”

Regarding the possibility of the CFD being subject to inspection from a third party, as Lam had suggested, Wong said: “If this can be done by the AL I can agree with this. I don’t think there is any problem. If there is a social consensus of this also, we are always supportive.”

Replying to other questions, the Secretary noted the added pressure over the existing number of officers, which have been stretched by the entry into operation of the Hong Kong-Zhuhai- Macau Bridge that has warranted the dispatch of a total of 210 officers.

“Of course we are feeling pressure. We sent 210 officers for customs inspections, which is a very low number when compared with the almost 600 from the Hong Kong side and over 500 from Zhuhai. We are doing what we can,” the Secretary said. “The same happens in Gongbei where the staff from the mainland side is double that from Macau. This is one of the reasons that justifies our investment in technology. Our passage is in fact faster [than the Chinese side] due to the automatic passage system installed. We are going to continue to resort to technology to solve some of these [manpower shortage] problems.”

In reply to a question from lawmaker Fong Ka Chio during the policy address for the area of Security, Secretary Wong Sio Chak stated that “crimes related with gaming have been [becoming] more organized and more reliant on technology. The majority of them do not even happen in person anymore but via the internet and other methods,” Wong said, adding that the government is trying to tackle the problem with “regional cooperation.”

Wong remarked that to install facial recognition software systems in casino surveillance cameras is “not possible” because it would breach the current laws that only allow such systems to be enforced in public areas.

“Casinos are private spaces and cannot be considered public areas. The police cannot install this [facial recognition system] there,” he said, adding, “in the future, if needed, we would have to review the law first, in order to be able to enforce such a system and install those kinds of cameras.”

Fong had noted that much of the crime in Macau occurs inside casino venues or is related to the gaming industry.

“The facial recognition systems currently, if in good lighting conditions, are very accurate,” he said, suggesting that such systems could be used as a way to avoid the entry of previously identified criminals and other people that have been blacklisted. They could also help to identify internationally wanted criminals, he said in reference to the recent revelation that detained drug lord “El Chapo” had been known to be a Macau gambler.

Separately, Wong appeared to welcome a suggestion by lawmaker Ho Ion Sang, who suggested that the government might organize a day per year dedicated to a general drill – which should include the entire population – as a way to train, prevent and alert the population for situations of emergency and disaster.