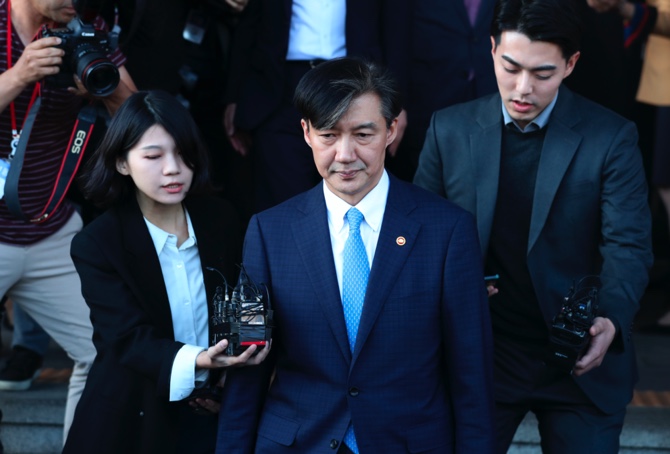 Prosecutors said yesterday they are seeking to arrest the wife of South Korea’s former justice minister, who resigned last week amid allegations of financial crimes and academic fraud surrounding his family that sparked huge protests and dented the popularity of President Moon Jae-in.

The Seoul Central District Prosecutors’ Office said it requested an arrest warrant for Chung Kyung-shim over her suspected involvement in dubious private equity investments, attempts to destroy evidence, and creating fake credentials to help her daughter get into medical school.

Chung and her husband Cho Kuk have denied legal wrongdoing, although Cho has apologized over alleged perks his daughter received when entering a top university in Seoul and a medical school in Busan.

The former justice minister, who for years built a reputation as an anti-elitist and reformist, said last week he was stepping down to reduce the political burden of Moon, whose approval ratings have dipped.

Cho’s resignation came after huge crowds of his supporters and critics marched in South Korea’s capital for weeks, demonstrating how the months-long saga has further polarized a nation already grappling with deep divides along political, regional and generational lines.

Moon’s liberal Minjoo Party and pro-Cho protesters, who have continued their rallies despite his resignation, have accused prosecutors of pushing an excessive investigation out of resistance to Cho’s reform plans, which included curbing prosecutors’ powers, which critics say are excessive.

But the controversy surrounding Cho has struck a nerve in a country that’s struggling to tackle worsening inequality and brutally competitive school environments and has tarnished the image of Moon, who vowed to restore faith in fairness and justice after replacing conservative President Park Geun-hye, who was impeached and jailed for corruption.

Recent polls suggest Moon’s approval ratings are at the lowest level since he took office in May 2017, an alarming development for the ruling liberals ahead of parliamentary elections in April. AP