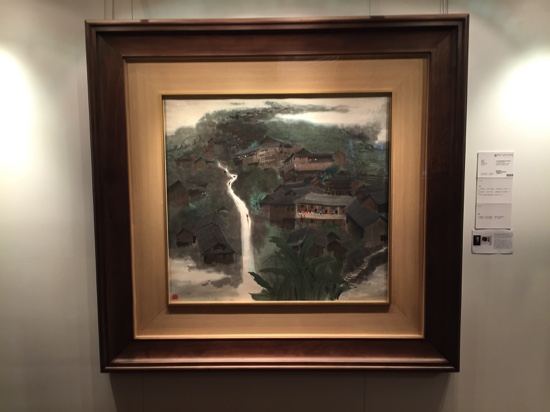 The opening ceremony and ceremonial ribbon-cutting for the Poly Auction Macau Art Fair and Art Auction took place yesterday at the Regency Hotel in Taipa, formally launching the four-day cultural experience.
The opening, co-organized by Poly Auction Macau Ltd. (Poly Macau) and Chiu Yeng Culture Ltd., was attended by former Chief Executive Edmund Ho, lawmaker Angela Leong, and Chiu Yeng Culture founder Sabrina Ho.
During the ceremony, Angela Leong expressed that the two events are “in sync with the Macau Government’s vision of building a diverse cultural environment and improving the tourist and creative industries to bring a vibrant new dimension to Macau’s non-gaming cultural landscape.”
The Poly Macau Art Fair project brings together 60 young artists from the Greater China region, whose works are installed in separate rooms at the Regency Hotel. Sabrina Ho, who personally oversaw the rooms’ design, sought to reinvent ordinary living areas and offer visitors a unique experience in each space.
The Poly Macau Art Auction features both traditional masterpieces and contemporary artwork from across Asia, divided into a number of categories.
The auction, which will take place on Sunday, January 10, presents connoisseurs with ancient artworks such as Buddhist art and Qing Dynasty ceramics.
The preview for the auction began yesterday and will run until January 9, the day before the auction is held.
At a media preview yesterday, the Times had the opportunity to scope out some of the works set for the auction on Sunday.
The highlights included a series of works by the late Chinese artist Wu Guanzhong, taken from a collection entitled, “Life and Death in Art.” Two of the pieces most prominently displayed in the auction hall are Wu’s “Yunnan Landscape” and “A Village in Guizhou,” with the former expected to fetch between HKD8.5 to 12 million if sold.
Printed on an information board next to the exhibition is a quote from the patriotic artist, who passed away in 2010: “I want to donate the best of my paintings to the people, to the country. This is my wish.”
In a partially walled-off room behind the Chinese painting section sits a unique set of works by Xu Bing, titled “New English Calligraphy – a poem by W.H. Auden.”
The works comprise eight calligraphy masterpieces adorned with nonsensical characters, which are in fact a blend of traditional Chinese characters and Western words using the Latin alphabet.
A former gallery assistant who attended the media reception explained to the Times that the eight-piece set, valued between HKD2.8 to 4.8 million, represents a blend of East and West. “Xu creates a unique language through these hybrid characters.”
Also on display were contemporary art pieces such as Japanese artist Yoshitomo Nara’s 1993 surrealist acrylic painting, “Dog From Your Childhood.”
Zhang Xi, the deputy general manager of China Poly Group Corporation, said that the event marks the start of a series of art and cultural events hosted by Poly Auction Macau, which will “bring a breeze of new life into the development of Macau’s cultural diversity.”
He added that in the group’s 10th year, “Poly Auctions [in China] achieved RMB9 billion in sales, continuing [their] leading position in the global market of Chinese art.”
Meanwhile, Angela Leong praised the Poly Macau events for their role in “building a bridge that connects local art and culture around the globe.”
“We hope that Macau will become an art hub in the future,” she concluded. Staff Reporter