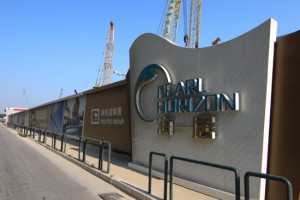 The property developer of the maligned Pearl Horizon residential project expressed his reluctance to join a future public tender to redevelop the land.
After the authorities clarified that the group’s land use concession would lapse later this month and that they would launch a new tender, Polytec Asset’s chairman Or Wai Sheun told the Chinese broadcast media outlet MASTV
that he most likely would not get involved.
“Who knows who will be granted the land in the next tender?” questioned Or. “We dare not take the risk to get it back, as no one knows what the outcome will be.”
The land was initially granted to the Hong Kong-based property company 25 years ago, which used it to erect a textile factory. The usage was changed in 2006 to be devoted to residential development, Or explained.
Or Wai Sheun claimed the subsequent nine years were not sufficient enough for him to implement the renewed construction plan as he had yet to receive the green light on the architectural plans in the first seven years.
On Tuesday afternoon, scores of pre-sale property owners stormed to the company’s office demanding an official response to their advance purchase as most flat buyers have been left in limbo. It was said that a meeting between both sides would be scheduled for Friday. AU