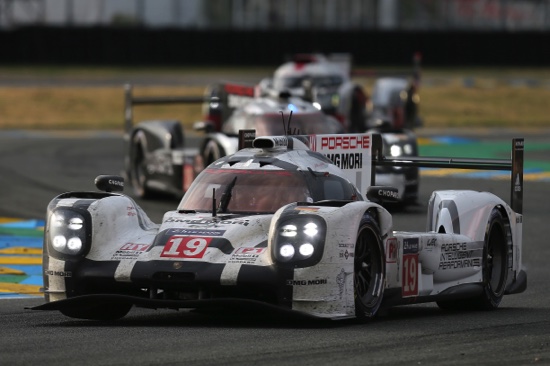 The Porsche 919 Hybrid No19 of the Porsche Team, with drivers Nico Hulkenberg of Germany, Earl Bamber of New Zealand and Nick Tandy of Great Britain, leads the race

With German Formula One driver Nico Hulkenberg behind the wheel, Porsche won the 24 Hours Le Mans yesterday to end Audi’s five-race winning run and clinch a record 17th victory at the famous endurance race.
Hulkenberg was one of the three drivers in the No. 19 car, which finished ahead of No. 17 Porsche, featuring former F1 driver Mark Webber, and Audi’s No. 7 car.
Audi had won seven of the past eight races, with Porsche’s last win coming in 1998.
“Thank you so much everybody, great effort over the last few months,” Hulkenberg said over race radio as he headed back into the garage waving to the flag-waving Porsche fans.
The 27-year-old Hulkenberg, driving in the race for the first time, will be back in action in a Force India car at the Austrian Grand Prix next weekend — his 85th F1 race.
British driver Nick Tandy and Earl Bamber of New Zealand were the other drivers in the No. 19 car. “These are tears of happiness. I’m lost for words,” Tandy said. “I hope it’s the first of many. I grew up watching the race.”
Webber was partnered in the No. 17 by German driver Timo Bernhard and New Zealander Brendon Hartley.
“It’s been an incredible race, an incredible sports car race,” Webber said.
Porsche returned to Le Mans last year after a 16-year absence in the top category, but struggled because of a mechanical problem as Marcel Fassler, Andre Lotterer, and Benoit Treluyer helped Audi to victory. This time, the Porsche 919 hybrids proved too dominant after overcoming an early scare.
“There’s only victory that counts in this race … Porsche deserved to win. Hats off to them,” Lotterer said. “We’ll do everything to come back stronger and we’ve learned a lot from this race.”
Audi’s No. 8 finished fourth ahead of Porsche’s No. 18. Audi’s bad luck was summed up when, with two hours to go, the No. 7 car, driven by Treluyer, went to the garage for an oil change and then had to come back straight away to fix some loose bodywork.
“We were very competitive yesterday, it went well for us on Saturday but things changed overnight,” Audi director Wolfgang Ullrich said. “We had a problem with our bonnets, which never happened to us before. It’s something we’ll have to study and rectify back home.”
Shortly before the end of the race, Ullrich went into the Porsche garage to congratulate his rivals.
“It’s the end of a winning run for Audi, but we’ll be back next year,” he said.
In the jubilant Porsche garage, team members held up white T-shirts with the No. 17 written on them.
The 83rd edition of the race was held up again in the morning shortly before 8 a.m. (0600 GMT) when a safety car came out for the fourth time after Roald Goethe’s No. 96 Aston Martin crashed heavily and became the 10th car to retire from the race.
The 55-year-old Goethe was conscious after the accident and then taken away in an ambulance.
Shortly before 7 a.m. (0500 GMT) the No. 7 Audi rolled into pit lane missing a large piece of its right-side bodywork. The Audi team quickly took the car into the garage, but still lost seven minutes making repairs.
With Hulkenberg behind the wheel, Porsche started to build a comfortable lead over the No. 9 Audi driven by Rene Rast.
Porsche’s scare came with less than one hour of the race gone when Frenchman Patrick Pilet was caught in a crash. The race was held up briefly as a safety car came out in what proved to be an action-packed opening few hours.
The crash happened when Swiss driver Alexandre Imperatori lost control of his Rebellion Racing car at the Forza Motorsport chicane, because of oil on the track. His car hit Jonny Kane’s Strakka Racing car and impacted on Pilet.
After about five hours of racing, another Porsche — driven by Christian Ried — had to pull over with some flames coming out of the back.
A total of 264,000 fans watched the race over the weekend. AP