Portuguese in HK unhappy with exclusion from voting on presidential election 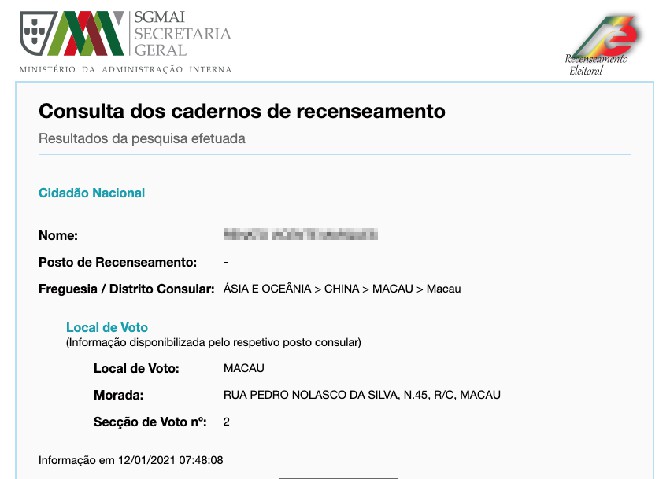 Portuguese nationals residing in the neighboring region of Hong Kong (HK) are disgruntled with the fact that they will not be able to cast their votes for Portugal’s 2021 presidential election, which will take place on January 24.
Several Portuguese citizens working and residing in HK have expressed criticism toward Portuguese authorities for not attributing enough importance to the many Portuguese who reside abroad.
Angela Lázaro-Gomes, a teacher in HK, told the Times that this exclusion, which has already been acknowledged by the Consul-General for Macau and Hong Kong, Paulo Cunha-Alves, shows the “Portuguese authorities recognize that the presidential elections are considered insignificant.” She added that this is “treating Portuguese expatriates as an inferior class of Portuguese, whose opinion and interests are irrelevant.”
Lázaro-Gomes further noted that “in times of pandemic, it also reveals how unprepared [the Portuguese authorities] are, being incapable of foreseeing the difficulties that would arise in the process and present [timely] solutions or alternatives.”
For the Portuguese citizen, during a time when the Covid-19 pandemic is reaching new highs in many locations around the world, the process of participating in an election should be safeguarded to prevent new infections. She suggested that “postal voting before the election day should be allowed for all Portuguese, just like [the same authorities] allowed for the nationals in the U.S.”
According to another Portuguese citizen residing in HK, postal voting is not allowed in the presidential election, except for a few exceptional cases when people are temporarily out of Portuguese territory due to their professional duties or representation. By contrast, in legislative elections, postal voting is broadly accepted.
Both Portuguese citizens heard by the Times agree that postal voting is a solution that is supported by many Portuguese nationals living abroad, and they would also accept a measure such as the simplicity of the electronic vote.
“I absolutely agree [with the idea of the electronic vote],” said Lázaro-Gomes, adding, “In fact, [high] abstention [rate] has been a topic in discussion for years. Anything that facilitates voting should be welcomed and applied. Besides, the introduction of an electronic voting system would also facilitate vote counting and ease the whole process.”
According to unofficial data from several sources familiar with the Portuguese community in HK, the exclusion of HK from voting directly affects between 50 to 70 expatriates currently in the city. However, the actual number of Portuguese citizens who are also HK citizens is far higher, reaching several thousand.
The exclusion of Portuguese in HK from voting comes as a result of border restrictions that have been imposed due to the Covid-19 pandemic that disallow the installation of polling stations in HK, in addition to obstacles preventing Portuguese citizens residing in HK from traveling to Macau to vote at the polling stations installed at the Consulate General of Portugal in Macau and Hong Kong (CGPMHK).
Early this week, the Consul-General explained to Lusa news agency that such limitations come as, under current prevention and control measures, residents in HK would have to undergo a 21-day quarantine upon arrival in Macau, which would be followed by another 14-day quarantine upon returning to HK.

Portuguese in Macau vote next weekend
Contrary to those Portuguese nationals residing in HK, Portuguese nationals registered at the CGPMHK will be able to cast their vote in the Portuguese Presidential elections during the weekend of January 23 and 24, a notice from the CGPMHK informed.
The polling stations will be, as usual, located at the building of the consulate and will be open for voters to cast their votes from 8 a.m. to 7 p.m. on both days.
Portuguese citizens who confirm their eligibility to vote and the number of the polling station they should use on voting day, can use the purpose-built website (www.recenseamento.mai.gov.pt) to submit their Portuguese identification card number and birthdate.
Voters must go to CGPMHK between 9 a.m. and 4 p.m. with their Portuguese ID card.
The presidential race in Portugal includes a total of seven candidates: Ana Gomes, André Ventura, João Ferreira, Marcelo Rebelo de Sousa (incumbent), Marisa Matias, Tiago Mayan, and Vitorino Silva.
According to the most recent election polling survey, de Sousa is projected to reach easy re-election with about 59% of votes.
This week, the incumbent and lead candidate was diagnosed with Covid-19, although without developing symptoms and in good health, Palácio de Belém has reported.